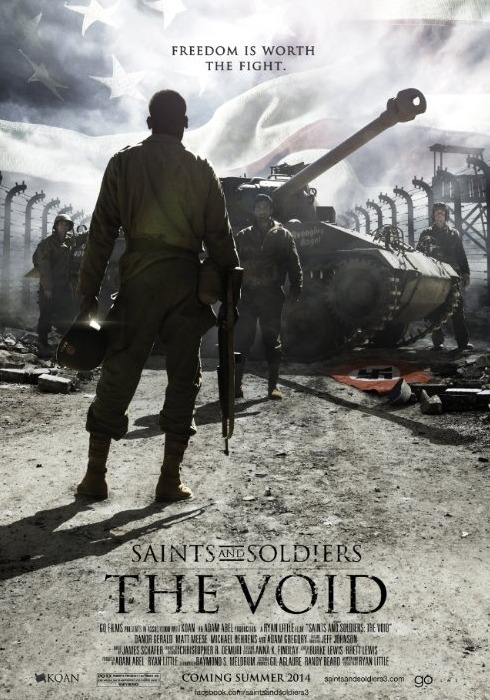 When film producer Adam Abel and director Ryan Little came up with the idea to make a short film about Mormons during WWII, they had no idea that it would turn into a beloved film franchise—with three films, no less.

Within the past decade, Saints & Soldiers has become a household name for many Mormons.  Clear back in 2003, the first Saints & Soldiers film took the Mormon world by storm. It was a simple idea, but poignant: a returned missionary is forced to fight as a WWII soldier against the German people he grew to love during his two years of service. But that idea soon typified what all three Saints & Soldiers films would focus on: the humanity within an inhumane war.

Jeff Simpson, president of Deseret Book, says of the films, “All the immensity of war films plus the human aspect of the story—that’s what makes it a successful franchise. . . . It’s great to have these completely different stories that share the same ethos.”

The Void focuses on a rather sensitive and often overlooked aspect of human conflict during World War II: racism. Rarely do people think about the conflict that occurred within the ranks of the American troops that were forced to put their personal issues aside and fight shoulder to shoulder with men of a different race—men they were often taught to dislike.

Actor Danor Gerald plays the African-American soldier that is forced to take charge when the commanding officer dies. But he soon realizes that not everyone in his tank squadron is willing to take orders from a black man.

“It didn’t take much for me to read that part and connect to it emotionally,” says Gerald. “It’s a question of thinking how do we reconcile our own internal conflict that is just as bad as the external conflict we’re in. . . . We have this real life good versus evil going on. That’s real history.”

Producer Adam Abel is very proud of the story that the film portrays. And he knows this story can’t be contained within one film that highlights just one war in history. “If the audience only sees it as a blacks and whites issue, then they’re missing the point. They’re missing the modern application today. . . . I hope this film leaves people with something to talk about and that it brings people together. The takeaway is about how to serve others and put judgment aside. Just serve others regardless of the color of their skin or their uniform. Just be the best person they can be.”

To make this movie the best one yet, filmmakers enlisted the help of other popular LDS entertainers like Studio C’s Matt Meese and singer Alex Boyé. These talented men along with other great Mormon actors, moving dialogue, and explosive action make this story jump off the screen.

Saints & Soldiers: The Void hits theaters August 15, 2014. But if you want a sneak peek at this epic film, you can see it for free at a special screening on Friday, August 5, at 6:30 p.m. at the Fort Douglas Military Museum in Salt Lake City. This screening is in honor of Captain McConkie, a WWII army captain who drove tanks. It is a free event, with 200 seats available. Don’t miss out on seeing this incredibly moving and action packed film!

Don’t forget to get your own copy of the first two films from DeseretBook.com. These are the stories that will engage viewers for generations to come.