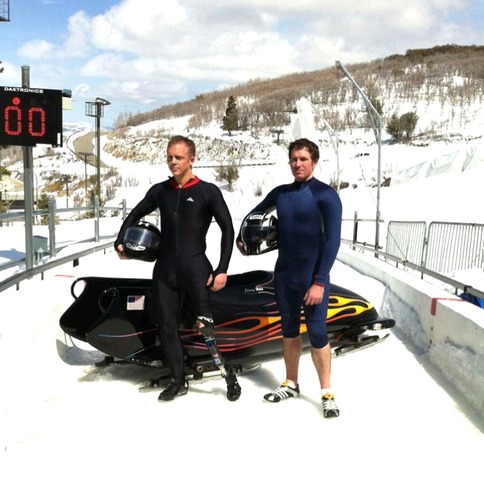 Racing to the top: An LDS Paralympic hopeful's journey

Cody Reese’s life has been anything but ordinary. The 27-year-old athlete has endured trial after trial, but continues to be an inspiration to his team and coach.

Reese was born with a rare condition: his left leg had no femur. The doctors had to amputate his foot when he was two, marking him as “different” for the rest of his life.

Scout leaders refused to take him on campouts, and the dating and dance scenes were always tough because of his lost limb. Reese attributes his buoyant attitude now to moving several times as a child, which he said allowed him to “come out of his shell.”

Reese has always had a passion for sports, beginning with skiing at three years old. With a goal to enter the Paralympic Games as a skier, he raced until at age 13 when he was picked for the Alpine Junior Elite team—a feeder for Paralympic hopefuls.

Life threw a curveball once again when Reese’s parents ended their marriage in divorce. Reese volunteered to give up skiing if it would help ease the strain on the family. He didn’t ski for the next nine years.

Reese admitted to falling away from the Church after his parent’s divorce, and as a result, fell in with the wrong crowd.

He always had the Church in the back of his mind, but it took a stranger in a BYU hat to push him to come back, and a return to sports to keep him going.

That stranger was affiliated with a YSA ward, and invited Reese to an activity. He agreed and showed, beginning his activity in the Church.

Years later, after a move to Utah from Seattle, United States Adaptive Bobsled director Dave Nicholls recruited him for a bobsled program for amputees and paralyzed individuals. Reese turned down him down the first time, as he had just undergone a surgery to fuse his neck. A second phone call came a year later, but Reese declined again. A year later after a third phone call, he decided to humor Nicholls with a visit to the track.

USA Adaptive Bobsled Coach Jeremy Holm said he was very interested to see Reese try piloting a bobsled, given his athletic background. When he saw Reese’s first run, the coach concluded that he had “a gift.” Reese loved every minute of it, calling it “a rush you can’t equate.”

Holm and Reese had much in common from the get go—they are some of the youngest guys in the team organization, and are both the only Latter-day Saints.

“I don’t see myself as a leader. … [Everyone on the team] is on the same page,” Reese said.

“Cody is the face of our group, an ideal athlete. He’s dynamic. Others look up to him, to his maturity and dedication. Cody [Reese] has always stepped up to the plate.”

Coach Holm said that in the sport, “it is easier for other athletes to respect LDS standards.” The two stick together and support each other in living the standards when they’re out as a team.

Reese and Holm both see stunning parallels between life and the sport. Coach Holm pushes his athletes to be the best they can be, on and off the track—a reason why Reese is so respected on the team.

It is also the reason USA Adaptive Bobsled is pushing hard for acceptance of the sport in the Paralympic Games.

Currently, bobsledding is not an official Paralympic sport. There are various rules requiring a minimum number of World Cup Races and nations to be involved in the sport before it can become official. But Coach Holm is optimistic that his team’s Paralympic dreams will materialize in time.

When Holm took over as coach for the team a year ago, it was mostly a recreational opportunity. Now he focuses his attention on developing his athletes for competition. Reese’s leadership, youth and natural talent make him a large part of the team’s efforts to train for competing on the world stage.

But wherever their efforts go, one thing is for sure: the biggest challenge is all but conquered. In regards to Cody’s return to church, he gave this advice for those who are also in the inactive stage:

“Jump in feet first. You have to take the first step; it just gets easier from there. Plus, there are little confirmations along the way. It’s like you’re at the bottom of a hill. You can’t see what’s on the other side, you just have to push yourself up the top. Once you’ve cleared it, life is easier.”

Coach Holm related a lesson about the ice on the track: Though inches thick, even minor crashes can scar and chip the ice deeply. “When you walk away [off the track], the workers fix up the scratches and the track is clean. It’s such a great analogy for the gospel, and the Atonement.”

Both men agree; the winning run of life doesn’t have to be perfect. When you wreck, get up and go again.