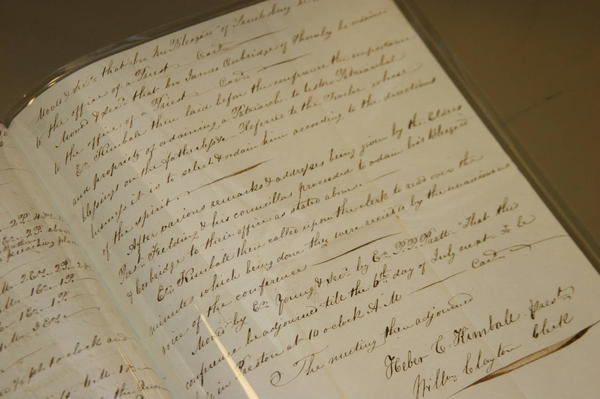 Recently, a well-preserved copy of the Church’s 1840 conference report was found in the possession of the descendants of the Wilford Woodruff family and acquired by Anthony Christensen of Anthony’s Antiques and Fine Art. The report indicates the original owner was Wilford Woodruff. The report is important because of the meeting and conference associated with it in which a number of significant historical items were discussed, adopted and announced,” said photo historian Ron Fox.

The conference report also indicates that a general conference of all the Saints in the British Isles was held in Preston the following day on April 15. Some of the things decided at the meeting were the production of a hymnbook, which hadn’t been done since Emma Smith had been tasked with creating a collection in 1835. This action was to be under the supervision of the Quorum of the Twelve, and a committee of Brigham Young, Parley P. Pratt and John Taylor was assigned to assemble the hymns. This 1840 hymnbook was used into the 20th century.

Another thing decided upon at the conference, according to the report, was the production of the long-running monthly publication for members of the Church that would be given the name Millennial Star.