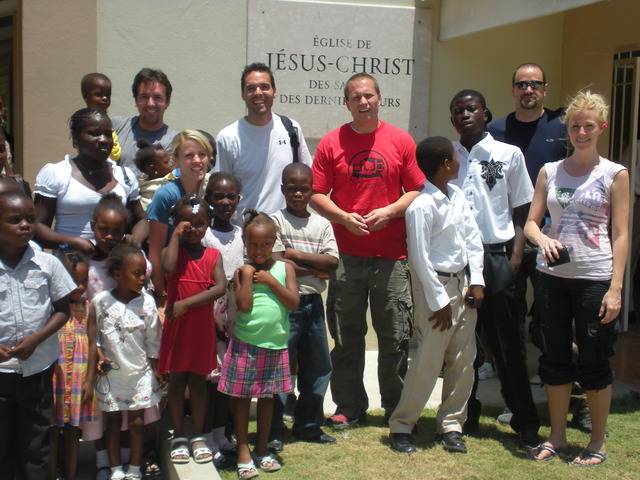 Sadly, reconstruction efforts in Haiti have inched forward at a painfully sluggish pace due in large part to a nearly nonexistent government. That, compounded by a cholera outbreak that has killed 3,600 people and hospitalized 50,000 since mid-October, has paralyzed the country.

“Unfortunately, not much has changed since the earthquake,” said Erik Sorenson, Church member and co-founder of Utah Haiti Relief. “The tent cities are in bad condition, and the presidential election dispute has caused a lot of rioting and security issues.”

In fact, according to a recent report by UK-based Oxfam International, “less than 5 percent of the rubble has been cleared, only 15 percent of the temporary housing that is needed has been built, and relatively few permanent water and sanitation facilities have been constructed.” But even amidst the quagmire, two nonprofit organizations founded by Church members—Healing Hands for Haiti and Utah Haiti Relief—have been able to make significant progress.

In 1999, Dr. Jeff Randel, a physical medicine and rehabilitation doctor who served a mission in the tiny Caribbean country, founded Healing Hands for Haiti. Tragically, the facilities for the well-organized and effective nonprofit was reduced to rubble following last year’s earthquake. Even so, volunteers have still been able to make an impact.

“We’ve just opened a new temporary clinic in Port-au-Prince,” said Kim Butler, a team leader who has been with Healing Hands for Haiti since 2001. Butler said that about 90 percent of the rubble has been cleared off of the organization’s compound. In fact, later this month there are plans to break ground on a $1.8 million rehabilitation hospital to replace the organization’s damaged buildings.

Despite the setbacks Healing Hands has suffered since the earthquake, the focus of the organization is clear—provide rehabilitation for injured Haitians. “One thing Healing Hands is really focusing on is treating spinal cord injury,” Butler said. In addition, the organization provides rehabilitation for amputees, support for hydrocephalic children and a program to repair and maintain wheelchairs.

While Healing Hands for Haiti is focusing on rehabilitation, Utah Haiti Relief has zeroed in on caring for women and children. “We decided to focus on two orphanages on that first trip last year, and we have been helping them ever since,” said Sorenson. In addition, the nonprofit recently completed construction of a women’s center (which can house about 100 people) on the property of the Enfante Jesus orphanage.

“We created this model so women who were widowed, many of whom have been disabled because of the earthquake, can keep their children at the orphanage while they learn how to live with new disabilities and receive counseling,” Sorenson said. “Once the women are ready, we teach them business skills and life skills to help get the economy rolling again.”

Other Utah Haiti Relief projects include building a school and a new medical clinic.

“We feel very blessed that we’ve had the opportunity to go down and help,” Sorenson said. “Our hearts are still in Haiti. In fact, I’m adopting a little girl who we helped get rehabilitated. But it’s an endless process—since the presidential election in November, no one really knows who is in charge.”

Because the nine LDS chapels in or near Port-au-Prince were mostly undamaged by the earthquake—something many people see as a miracle—the buildings were able to serve as shelter for as many as 10,000 Haitians in the weeks following the disaster. Meanwhile, the Church quickly gathered emergency supplies such as food, tents, tarps, blankets, water-filtration bottles, first-aid kits and even toys. “We sent more than 60 truckloads of relief supplies, including 10 air shipments. That includes a million pounds of food and over three thousand tents,” said Lynn Samsel, Director of Humanitarian Services.

“Now we are largely assisting our members with their needs,” he said. “We have about one thousand members still living in tents and about thirty-three families living on Church property. Our goal is to have everyone living within the community by the end of February.”

Samsel explained that the difficulty in finding places for members to live lies mainly with land issues. “We know our members need a place to stay, but they need to find land where they can put a temporary shelter. The hard part is proving who owns the land, since so many records were destroyed in the earthquake, and finding someone who can give permission for members to live on it. Then there’s the problem of getting the debris cleared. We’ve only built seventy-three temporary shelters, but we were anticipating building four hundred.”

Samsel said that in addition to finding suitable housing, the Church continues to assist members and some of their neighbors with employment. “We’ve placed about 356 people, with 300 additional in self employment,” he explained. “We’ve also established business partnerships where we’re paying for members to receive training, and some employment has come as a result.”

He continued, “Our focus has been on housing, employment and education. We’re looking to do a more thorough assessment once the government is in place. We really want to make sure that what we do is going to be sustainable and that it’s something the country is comfortable with—we don’t want to get ahead of the people we’re trying to help.”

Firm in the Faith

By all accounts, the Church is doing everything possible to care for its Haitian congregations. But how have the members been coping since the disaster? It seems Latter-day Saints who visit a ward in Haiti describe the membership there the same way—faithful, hopeful and resilient.

“The priesthood leaders and Relief Society leaders have been remarkable from day one,” said Samsel. “The work goes forward. Attendance in church has gone up and baptisms continue.”

“When you go to church on Sunday, you would never in a million years guess that some of those people are living in tents or living on the streets,” said Butler. “The congregation is full, they are happy, they are enthusiastic, they are clean. I attended a service there in October, and for the closing song [the congregation] sang “Joy to the World” at the top of their lungs—every person. They are well and as strong as ever.”

Prosner Colin, president of the Haiti Port-au-Prince Stake, reports that with the help of the Church programs, the local members are pressing forward with their lives. “Although the Church lost about 42 members after this disaster, members have stayed strong and [are doing] their best to find employment,” he said. “In that matter, the Employment Resource Services sent a group of employment specialists from Salt Lake City to help the members strengthen their skills, psychologists to help members avoid mental problems, engineers to help them have a transitional housing converted into a shelter, [as well as] the establishment of a bishop’s storehouse.”

He concluded, “Just seven months after receiving my call to serve [as stake president], the country hit with this terrible earthquake. Nevertheless I could see second after second that the hands of the Lord were upon us. Really I did not know what to do, but He knows, and He takes care of us.”

Humanitarian HaitiHumanitarian,Haiti,
Comments and feedback can be sent to feedback@ldsliving.com