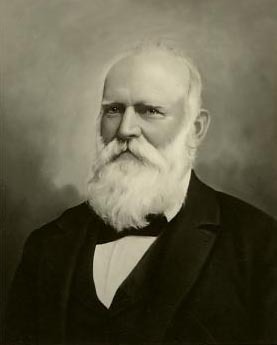 Remembering the Rescue: The Legacy of Ephraim Hanks

Ephraim Knowlton Hanks was baptized in 1845 and eventually arrived in the Salt Lake Valley in 1847 after returning from service in the Mormon Battalion. One night, years later, Ephraim was visiting a friend when just before he went to bed he heard a voice call his name. The voice told him three separate times that the handcart Saints were in trouble and asked if Ephraim would help them. Each time he replied that he would if he were called. Two days after this experience, Ephraim arrived in Salt Lake City, just in time for Brigham Young’s call for volunteers to help the handcart companies. Ephraim did not ask for a few days to prepare like many of the volunteers did, but obediently declared, “I am ready now!” He began his journey over the plains the very next day.

On his way to reach the distressed Saints, Ephraim abandoned his wagon in a severe snowstorm and pressed on with just his horse to carry supplies. The night before he reached the Martin Handcart Company, he asked the Lord for a buffalo so he could have something warm to sleep on and something to eat. The Lord not only provided him with a buffalo that night, but with another one in the morning, which he loaded onto his horse before continuing his journey. He at last reached the Martin Handcart camp on the evening of November 10th, bringing hope of survival to the suffering Saints along with desperately needed food.

Thanks to the selfless perseverance of Ephraim Hanks and other rescue volunteers who came with supply wagons, the surviving members of the Martin Handcart Company finally arrived in the Salt Lake Valley on November 30th, 1856.

The true, heroic story of Ephraim Hanks still inspires artists today, like T.C. Christensen who recently directed the film Ephraim’s Rescue, which follows the event through the eyes of Ephraim Hanks. In commemoration of the 157th anniversary of the rescue, Excel Entertainment will donate $1 from each Ephraim’s Rescue DVD or Blu-ray purchased at Deseret Book or deseretbook.com to the Salt Lake Chapter of the International Rescue Committee between November 7th and 17th. The donated money will help sponsor a refugee family this Christmas through the International Rescue Committee’s annual Light One Candle program, and descendants of Ephraim Hanks will purchase and wrap the gifts for the family.