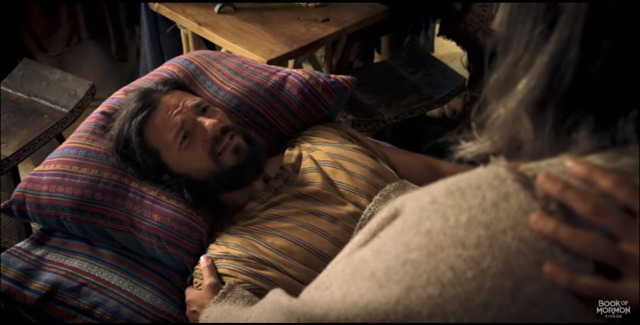 Repenting in 3 Days and 3 Nights: What I Learned from the Newest Book of Mormon Video about Alma the Younger

How long is three days? After watching the latest Book of Mormon video on Alma the Younger, I think it’s a lot longer than I used to imagine.

In the 11-minute video recounting the story of Alma the Younger’s conversion, we get a unique perspective on the familiar story of Alma the Elder and his wife praying for their wayward son. After Alma the Younger and the sons of Mosiah are rebuked by the angel, I was not surprised to see a representation of Alma the Younger’s harrowing experience of remembering all of his sins. What I was surprised by was how many times it switched between scenes of Alma’s internal torment and scenes of his family, friends, and neighbors praying for him in his home. It felt like it went on for a very long time, but when I thought about it, the switching scenes really did a good job of visually representing the three days and three nights that Alma the Younger lay tormented by his sins.

As I reflected on this representation, I thought about the repentance process that Alma the Younger experienced in a new way. When we are reading the story in the scriptures, it only takes a few verses for the rebellious son to see an angel and be left without strength for three days. Then, the first recorded words he says when his strength returns are “I have repented of my sins . . .” (Mosiah 27:24). While this repentance process may seem fast, as I watched the video, I realized that to someone tormented by sin, three days and three nights must have felt like an eternity. In addition, if we substitute the word repent with one of its definition words, changed, the verse makes a lot more sense: “I have changed . . .”

By the end of the three days and three nights, Alma the Younger remembers the words of his father about Jesus Christ and turns to Him. In return, the Lord forgives and teaches Alma about repentance about being “born of God” and being “changed from [his] carnal and fallen state.” Alma still had a lot of work to do when it came to fixing the damage he had caused to the Church, but his heart and his desires had deeply, sincerely changed.

As I vicariously lived the experience of Alma the Younger suffering over guilt for his sins, then finally remembering the words of his father about Jesus Christ and having a very personal experience with Him in this video, it was a powerful reminder to me that even making the smallest effort to turn toward the Lord can bring us great peace and happiness, as He is always right there to help us along the way.

Take a few minutes to watch this powerful new video and see what new insights you can find!