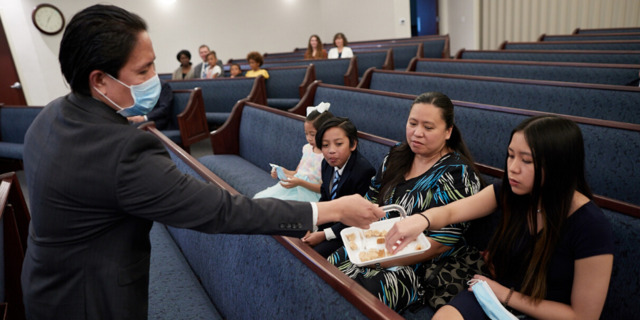 Responding to the Pandemic: Elder Holland on How Miracles Come during Trials

The Church of Jesus Christ of Latter-day Saints has been through a whirlwind during the COVID-19 pandemic. Nearly half of the Church’s 67,000 missionaries were sent home to ensure their safety, temple worship ceased temporarily, congregations could no longer gather in chapels for some time, and humanitarian efforts have been going forth throughout the world.

Events have happened so fast, in fact, it’s been hard to keep track of them all. But a recent Deseret News article has broken down the measures the Church has taken since January of this year and how Latter-day Saints around the world have been impacted by the pandemic.

Additionally, on March 6, Elder Jeffrey R. Holland was in communication with Korea Seoul Mission President Brad Taylor shortly before the Missionary Department informed him that 101 of the 131 missionaries in his area would have to return home. The apostle, who had been planning on having scripture study with the missionaries, asked the mission president if he would like to proceed. President Taylor responded that they would love to have Elder Holland join them before delivering the news to the missionaries of their imminent departure.

“It’s hard enough to say goodbye to six missionaries when they go home on schedule at the end of their missions,” President Taylor told Deseret News. “To say goodbye to 101 missionaries all at once when the news came out of the blue is one of the most difficult things we’ve ever done.”

Although many challenges and trials have occurred because of the pandemic, Elder Holland told the Deseret News in an email that miraculous things can come from these times, as well.

“Many of the miracles we see in the work of the Lord come out of stressful or difficult situations,” he wrote. “Jesus’ healings and restorative blessings came to people who were maimed, troubled, disenfranchised or poor—to name just a few categories.”

Throughout Church history, from the times of the Old Testament to the present day, there have been obstacles that had to be overcome, Elder Holland continued.

“The challenges to the work have always existed. In those moments we are frequently called on to ‘Stand still and know that [He] is God.’ No unhallowed hand nor any other difficulty can stop the work. He can do His own work and will. If we join Him in it as the missionaries surely do, every difficulty will be turned to their good.”

FIND OUT MORE DETAILS ABOUT THE CHURCH'S RESPONSE TO THE PANDEMIC AT Deseret News.

CoronavirusCoronavirus,
Comments and feedback can be sent to feedback@ldsliving.com