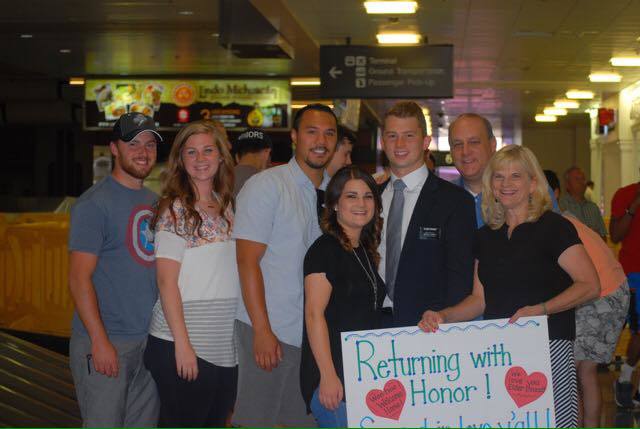 A former bishop, newly returned missionary, and a newlywed were killed Sunday afternoon when their car rolled over on I-15 near Moapa.

In an instant, everything changed for the surviving family members.

While traveling home from a family road trip to Utah, the Brandt family's car drifted to the left side of the road before hitting a pillar, rolling over, and catching fire.

Four of the five family members were ejected from the car. Three were pronounced dead at the scene: Michael Brandt (56), Ashley Brandt Piena (25), and Carlan Brandt (20). The other two family members, Joy Brandt and Kekoa Piena, were airlifted to a University Medical Center in critical condition.

Carlan Brandt had just returned from serving a mission in Alabama at the end of July when his family decided to take the road trip to Utah to celebrate.

A former bishop and an institute teacher, Michael Brandt was a strong family man. "The love he had for his children would tear him up sometimes talking about how proud he was of his sons and daughters," Bruce Hansen, director of the Las Vegas Institute, told Las Vegas Now.

"He and his kids are great people and we have great faith they are in a better place," family friend Mike Talbot told KSNV News.

Joy and Kekoa have several broken bones and other injuries they are currently being treated for. According to Bruce Hansen, Joy seemed mostly concerned about the family members who weren't involved in the crash and the heartbreak they'll feel at losing their father, brother, and sister.

But for the time being, the surviving family members are finding support from friends and members of the Church.

"Part of the fabric of the Church is when people have problems we all gather around them and try to support them and that's what's happening now," Talbot told KSNV News.

A GoFundMe page has been set up for the family to help with hospital and funeral expenses.