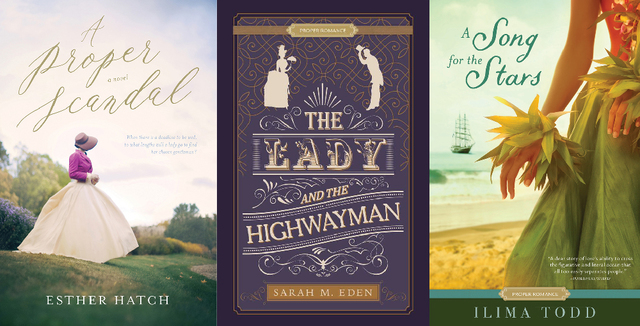 12 Romantic (and Clean!) Novels You'll Fall in Love With

As heiress of Rosings Park, Anne de Bourgh's domineering mother is bent on securing her a suitable match, while Anne herself is far more concerned with sketching the flora and fauna of the lovely sea town. It is in pursuit of artistic inspiration among the flowers that Anne becomes acquainted with Mr. Owen Talbot, a charming man with whom Anne feels an immediate connection, despite their differing stations.

Despite their growing esteem for one another, the couple faces an insurmountable problem: Lady Catherine has set her sights on a rich, well-connected man for her daughter, and Mr. Talbot is simply too common. With their love in jeopardy, the couple soon faces far graver problems. There has been a murder in Brighton, and Anne is innocently drawn into an amateur investigation that ultimately traces its roots to her own family.

A Song for the Stars

As the second daughter of a royal chief, Maile will be permitted to marry for love. Her fiancé is the best navigator in Hawaii, and he taught her everything he knows—how to feel the ocean, observe the winds, read the stars, and how to love.

But when sailors from a strange place called England arrive on her island, a misunderstanding ends in battle, and Maile is suddenly widowed before she is wed.

Finding herself in the middle of the battle and fearing for her life, Maile takes John Harbottle, the wounded man who killed her fiancé, prisoner, and though originally intending to let him die, she reluctantly heals him. And in the process, she discovers the man she thought was her enemy might be her ally instead.

The Lady and the Highwayman

Elizabeth Black, the headmistress of a girls’ school in 1830s Victorian London, is also a well-respected author of novels written both for and about the upper-class ladies of Victorian society. But by night, she writes very different kinds of stories under the pseudonym Charles King— the Penny Dreadfuls that are all the rage among the working-class men.

Fletcher Walker is the most successful author in the Penny Dreadful market, that is until Charles King started taking all of his readers. No one knows who King is, including Fletcher’s fellow members of a fraternity of authors. The group knows King could be an asset with his obvious monetary success, or he could be the group’s undoing as King’s readership continues to cut into their profits.

Determined to find the elusive Mr. King, Fletcher approaches Miss Black. As a fellow-author, she is well-known among the high-class writers. Elizabeth agrees to help Fletcher, if only to ensure her secret identity is never discovered. What neither author anticipated was the instant attraction, even though their social positions dictate the impossibility of a relationship.

Lies, Love, and Breakfast at Tiffany's

Women in Hollywood are just pretty faces. But Silvia Bradshaw knows that's a lie, and she's ready to be treated as an equal and prove her worth as one of Hollywood's newest film editors. She and Ben Mason had worked together as editors before Silvia got her big break, so he's the perfect person to ask for feedback on her first major film. But even as their friendship begins to blossom into something more, a lawsuit surfaces, jeopardizing both of their jobs—as well as their fledgling romance.

With everything to lose, Silvia meets Ben for breakfast at his favorite diner, Tiffany's, for one last conversation before the credits roll on true love.

Timothy has nearly given up on his search for a wife. Though he is the picture of a fine, social gentleman, Timothy wishes his finances provided a more stable foundation. When his Uncle Elliott offers him his inheritance, dependent upon approving his choice for a wife, Timothy is freed from the constraints of having to marry for money and is ready to marry for love instead. And he knows exactly what he wants in a wife.

His friend, Maryann, an heiress in her own right, tells him outright that his expectations are ridiculous—no such woman exists. Maryann had considered Timothy as a potential suitor for a time, but then their relationship shifted to friendship and she has avoided allowing herself to have feelings for him again.

It is only when Maryann leaves the London season early, that Timothy realizes that he had truly fallen in love with her and that his list of requirements was nothing but fantasy. If he hopes to build a strong relationship, Timothy must convince Maryann that she is the very woman he’d been looking for all along—before it is too late.

Wedding bells are finally ringing for Jacklyn "Jack" Wyatt and her FBI-agent fiance, Damon Wade. After their adventurous beginning, the happy couple finds the relative calm leading up to their big day, a huge relief. Unfortunately, it seems that the peace and quiet were too good to last. As they embark on their honeymoon, a weeklong cruise, Jack can't shake the feeling that something is off with her new husband. When she stumbles upon a secret plot—one in which her husband is a key player—she realizes this getaway will be anything but smooth sailing. When she delves into the shady happenings aboard the ship, she realizes Damon's involvement is just the tip of the iceberg—she has become an unwitting player in a deadly conspiracy, and in such close quarters, there is no escape. Now, Jack has no choice but to work with her spouse to unravel the truth before their happily ever after—and their lives—are ended all too soon.

Grace Sinclair has been callously cast out of her home. And though taken in as an orphaned child by the vicar and his wife, her unsurpassed beauty makes it impossible for her to remain in the vicar’s household—with two daughters of their own about to enter Society, the vicar and his wife see Grace as nothing but competition. Thankfully, Grace’s estranged Aunt Bell has agreed to take her into her home in London. But Grace soon learns her situation has just gotten much worse.

It takes only a moment’s acquaintance for Grace to ascertain that her aunt has married a detestable rake. And Aunt Bell, recognizing the danger of having her lovely niece too near her husband, gives Grace an ultimatum: The young woman has two weeks to find a man to marry, after which she will be turned out. With no experience in the art of attracting a husband, Grace quickly realizes that a worthy suitor might not be so easy to ensnare.

The Lady in the Coppergate Tower

Hazel Hughes believes there is nothing remarkable about her, not even her strange ability to heal the sick and injured. Her employer, Doctor Sam MacInnes recognizes her special talent, but because of the difference in their social status, he can't tell her how much he admires her. When a mysterious count arrives in London and reveals to Hazel the existence of a twin sister, she agrees to accompany him to the wilds of Romania, where she learns that her healing skills are needed to save her twin's life. Worried for her safety, Sam insists on traveling with her.

Faced with dark magic, malfunctioning automatons, and dangerous magical artifacts, Hazel and Sam learn to rely on each other as they untangle a deadly web of mystery surrounding the count and search for a way to free Hazel's sister from the cursed walls of the Coppergate Tower before time runs out on all of them.

As the only doctor in the frontier town of Savage Wells, Gideon MacNamara knows his prospects for a bride are limited. The womenfolk in town are either too young, too old, or already spoken for. So, being a practical man, he decides to take advantage of the matchmaking service of the day—mail-order brides—and sends away for a woman with nursing experience.

When Miriam steps off the stagecoach in Savage Wells, she sees a bright future in front of her. But when the town—and Gideon—meets her, ready for a wedding, her excitement quickly turns to horror. Somehow Dr. MacNamara's message had gotten turned around. He didn't want a nurse, he wanted a wife. When she refuses to marry him, she finds herself stranded in Savage Wells with some very unhappy townspeople.

Glass Slippers, Ever After and Me

Charlotte Kingsley loves to write and dreams of having her reimagined fairy tales published, but she keeps getting rejected over and over. And to top it all off, her best friend, Anders, gets engaged, making her realize she's going to lose the Prince Charming who lives next door. After another rejection letter from a New York publisher, Charlotte decides to switch gears. What if she wrote a book about celebrating women for who they really are instead of trying to create a fantasy world for them to visit? She could call it The Cinderella Fiction, fill it with practical advice for living authentically, become ridiculously successful, and then find the confidence to tell Anders how she feels before it's too late.

One year ago Charlotte Bower’s life was ripped apart when Creek Indians attacked, killed her parents, and separated her from her young brother—now, she will stop at nothing to find him. After a year of captivity, she has finally made her escape. Her search will begin in New Orleans, where captives were taken after the raid. But how to reach a city hundreds of miles away? As she watches men boarding a waiting ship, Charlotte formulates a bold plan: if it’s men they need for the ship’s crew, it’s a man they’ll get. Taking on her childhood nickname, Charlie, it is all too easy to gain passage on the New Orleans-bound vessel. Easy, that is, until Charlie is caught . . .

Enduring Promises of the Heart

The small community of Pleasant View is abuzz over Penelope Pottifer’s serialized romances in the local paper—and the real identity of the elusive Ms. Pottifer. Meanwhile, young writer Liz Black tries to tell those closest to her about her secret identity, without much success. Liz’s characters may have life figured out, but Liz herself doesn’t have a script to follow as she navigates her own unique adventures.