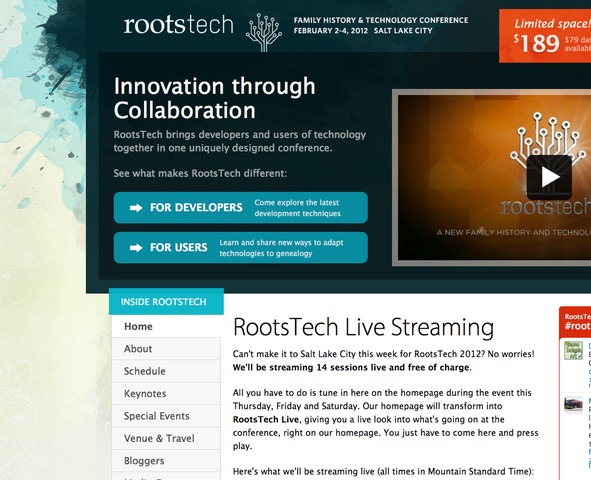 The parents and grandparents of this generation know better than anyone how quickly technology can evolve. They watched as the music record morphed into the cassette tape. After what seemed a comparatively short time thereafter, they saw the CD come to life, and before they could catch their collective breath, the MP3 player and iPod arrived. The growth of the music technology business is fairly simple to track, but technology in general is an ever-evolving phenomenon, and many people, young and not-so-young alike, have difficulty keeping up with it.

Genealogy, like every other industry, is experiencing its own burst of technology evolution. Fledgling genealogy technologists may be unsure of possible options for digitizing their history, or perhaps they simply doubt their ability to use current technology. The annual RootsTech Conference in Salt Lake City this weekend has been designed specifically to provide technological support to genealogists everywhere. The conference is notoriously popular, offering lectures and training to over 4,000 registered participants a year and streaming online to thousands more.

Paul Nauta, public affairs manager for FamilySearch, says that technology shouldn’t be a source of fear but simply a means to provide the best possible preservation of family records. Some genealogists see no reason to move on from their tried-and-true preservation devices, such as CDs, DVDs, and microfilm, but even those methods are showing their antiquity.

“CDs and DVDs have become a thing of the past,” said Nauta. “A lot of people are shocked to find out that there’s noticeable degradation in the quality of a CD within 5 years. DVDs are beginning to show degradation after 10 years.” Even flash drives, the most current of the mass storage devices, appear to be losing some ground. Nauta predicts that the flash drive will be a thing of the past within five years, and its replacement will likely be something known as “the Cloud.” Enter the Digital Age.

Cloud computing is a term that has only recently become popular among the everyday technology consumer. In general, “the Cloud” is a term used to describe all the data that is floating around internet space, like the cloud that surrounds Apple or Amazon. For most consumers, this storage system allows documents to be saved online without users facing the hassle of trying to transfer documents from flash drive to computer.

This concept is particularly useful in family history research; genealogists can store their data in a secure site, like familysearch.org, without the worry of losing it or transferring data. The Cloud also allows multiple users to edit a single page, like a page on Wikipedia or on a Google doc. For genealogists, this means that multiple family members can contribute different accounts of family history to an online family tree.

Mobile apps also rank high in genealogical significance. Technologists predict that within the next five years, computers will be less and less common, as nearly a third of the world’s population will be using the smart phone. Nauta confirmed this prediction, noting that many countries, rather than try and play catch-up with developing technology, can easily stay current with an app: “You’ve got a vast majority of second- and third-world countries who are pretty much moving along with the rest of the world and are having more and more access to portable technology to allow them to get involved.” Many family history companies are offering a variety of apps to make the process of genealogy more user-friendly.

Aside from the world of mobile apps and cloud computing, there are companies that offer digitization of family history files. This year’s RootsTech Conference will be offering information on digitizing family books that may be too valuable to pass back and forth between family members. Having a digital version of the book allows multiple family members to view the history without the possibility of losing or damaging a physical document.

The challenge of learning to apply all the new technology may seem daunting to genealogists, but keeping up with genealogical technology, since it is based on software and the Internet, is much easier than the physical upgrades of cell phones, iPods, or computers.

And the amount and manner of technology used in family history is purely based on personal preference. Many people use technology to do family history every day without realizing it, whether it’s uploading a family photo on facebook, blogging about a family reunion, or printing out photographs for a scrapbook. “Is that family history? You bet it is!” said Nauta.

The RootsTech Conference begins Feb. 2 and concludes Feb. 4. Rootstech.org provides further information on lecture topics, times, and registration for those interested in upping their ante in family history.