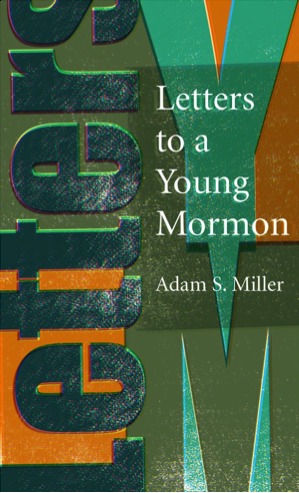 SPONSORED: Great New Book from Neal A. Maxwell Institute--Letters to a Young Mormon

byNeal A. Maxwell Institute for Religious Scholarship | May 13, 2014

This book is unlike anything ever written for a young Latter-day Saint audience. Although author Adam S. Miller spends his days teaching philosophy to college students, the most important lessons he has ever prepared have been directed to his own children. He composed this book as a series of letters meant for a young Mormon who is familiar with Mormon life but green in their faith. In simple but profound prose, Miller addresses the real beauty and real costs of trying to live a Mormon life in today’s world. Letters to a Young Mormon encourages Mormons young and old to live in a way that refuses to abandon either life or Mormonism. Most importantly, even while dispensing wisdom, Miller wonders alongside you.

Adam S. Miller is a professor of philosophy at Collin College in McKinney, Texas. He and his wife, Gwen Miller, have three children. He is the author of five books, including Rube Goldberg Machines: Essays in Mormon Theology, and serves as the director of the Mormon Theology Seminar.

Advance Praise for Letters to a Young Mormon: “Letters to a Young Mormon frustrated me. Not that I didn't like it, because I enjoyed it immensely. No, it frustrated me because I only wish I had had such a book to read when I was a 1960s teenager with racing mind and hormones. And perhaps more poignantly, I wish it had been available when my children were passing through those difficult and impressionable years. Letters to a Young Mormon is both tender and gentle, and at the same time provocative and intellectually stimulating. Its disarming honesty is only surpassed by the significance of its messages. I recommend it wholeheartedly, for young and old.”

“Miller’s letters read not like missives from a great distance or from lofty heights, but like the words of a friend who is just a little further along the road, sending back words of warning, encouragement, and the happy reminder to look at all the wonders along the path. No trail of breadcrumbs—these are small bright jewels to mark the way home.”

This article is sponsored by the Neal A. Maxwell Institute for Religious Scholarship.