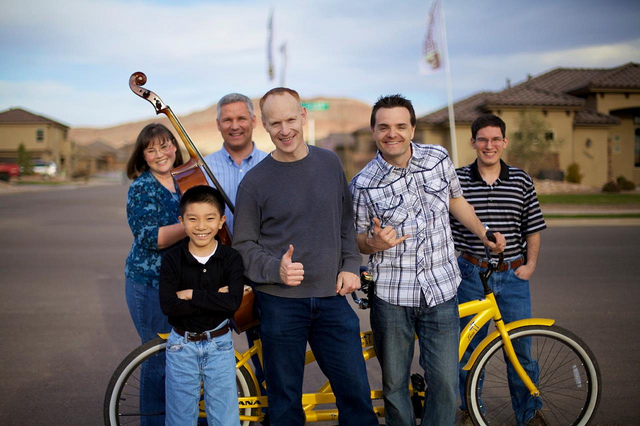 They came together under the most serendipitous of circumstances, yet The Piano Guys will tell you it was all meant to be. And with over 750,000 subscribers to their YouTube channel - greater than most of today’s major artists, and growing at the rate of 50,000 fans per month! - who’s to disagree?

These 5 dads from Utah began making music videos together for fun and their “hobby” turned into a worldwide phenomenon when their self-made YouTube videos amassed over 130,000,000 views collectively. Newly signed to Sony Masterworks, The Piano Guys release their self-titled major label debut recording on October 2nd, 2012.

Their album features highly original classical/pop music mash-ups that brings classical music to legions of new listeners, including “Michael Meets Mozart,” Michael being Michael Jackson; “Cello Wars,” which was brought to life by a Star Wars-inspired light saber/cello bow video battle; “Peponi (Paradise),” an African styled version of Coldplay’s “Paradise” which was depicted in a video whereby a grand piano was helicoptered to a 1,000-foot cliff; and “Code Name Vivaldi,” which blends a The Bourne Identity soundtrack riff with a similarly intense Vivaldi cello, its breathless video culminating on a flatcar on a high-speed train. The lead track, “Titanium/Pavane” mashes up French classical composer Gabriel Fauré’s “Pavane” with David Guetta’s “Titanium” – The Piano Guys having previously lensed a lovely take on Guetta’s “Without You.” The Piano Guys will also showcase an original tune called “Arwen's Vigil.”

Of course the CD wouldn’t be complete without the song that catalyzed The Piano Guys’ international fame – their unique 10-handed version of the One Direction hit “What Makes You Beautiful.” The video for this song was covered by media around the world including The Hollywood Reporter, CBS News, Perez Hilton, Mashable and many others. It has over 7 million YouTube hits to date. The guys will perform it for the first time on National TV on Katie Couric’s new daytime show “Katie” on September 17th.

The group credits their loyal fans with helping to spread the word…and have they ever! Every day the YouTube views for their 35 plus original videos increases by 500,000 and their YouTube channel, which has over 750,000 subscribers, grows daily to the tune of 2,500 members per day.

Ironically, The Piano Guys, who got their name from a piano store in St. George, Utah, are a quintet featuring only two musicians - only one being a pianist. Store owner Paul Anderson devised a Facebook promotional page and a YouTube channel featuring well-established, self-described “New Age Classical” pianist Jon Schmidt, who teamed up musically with Steven Sharp Nelson, an innovative cellist. Together, Schmidt and Nelson form the musical core of The Piano Guys, with Anderson - who has since closed the store - joining forces with genius co-videographer Tel Stewart in creating The Piano Guys’ videos. Al van der Beek, the fifth “Guy,” heads up the group’s studio operations, and also assists in co-writing and arranging, as well as percussion and vocal texturing. As seen in their One Direction video, in performance, all five of The Piano Guys frequently appear together.

The Piano Guys are spurred by their desire to broaden the audience for classical music while inspiring young musicians. “Lots of parents are using our music to show their kids how fun classical music can be and motivate them to learn instruments,” says Schmidt. Adds Nelson: “We want to show people that it’s not at all about fame or money, but trying to be good dads, husbands, examples—and we hope they see that in our videos.”

PBS will air a dedicated TV special, filmed at the Red Butte Garden Amphitheatre in Utah, in early 2013. For more information on The Piano Guys tour dates please visit www.ThePianoGuys.com.