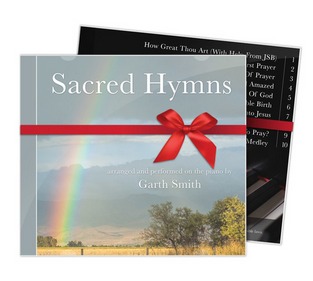 Oceanside, CA – G&D Productions are pleased to announce the initial CD release of new LDS artist and pianist Garth Smith titled “Sacred Hymns Arranged and Performed on the Piano by Garth Smith.” The official release date of Sacred Hymns is March 1, 2014. Sacred Hymns is a collection of 10 original arrangements of familiar LDS hymns prayerfully selected, arranged, and performed by Garth Smith on the piano.

Distribution of the CD is being handled via the website www.GarthSmithMusic.com.

Garth Smith was born in Brigham City, UT and currently resides in Oceanside, CA. He received classical piano training starting at age 5 and had since been involved as a keyboardist in country, jazz, and rock bands. He was a member of Nashville Songwriter’s Association, and won the California Country Music Association “Song of the Year” in 1999. He has accompanied musical theater, choirs, and performed as a soloist from the time he was a teenager.

“Sacred Hymns by Garth Smith invites peace and inspires reflection. For fans of Paul Cardall and Jon Schmidt, it’s time to add Garth Smith to your list of talented and uplifting LDS pianists.” - Patrick Ord, author of The Curtain

“Garth has given his compositional creativity free reign in this tender and inspired collection of hymn arrangements for piano. He has woven appealing harmonic explorations throughout each piece, as he captures the intended feeling and message within each hymn. Garth plays with a sensitive and expressive touch, which contributes so beautifully to this musical offering!” - Norm Boaz, M.A., founder and director, Vocal Arts Unlimited

To learn more about the Garth Smith CD “Sacred Hymns Arranged and Performed on the Piano by Garth Smith” visit the website www.GarthSmithMusic.com or contact Garth directly at: