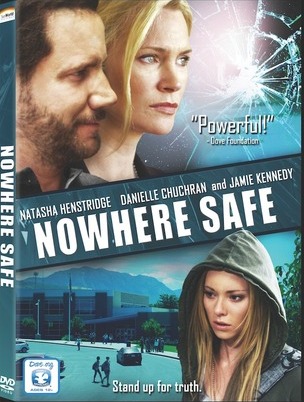 SPONSORED: New Movie with Message of Kindness to Release Tuesday

Hollywood stars Natasha Henstridge and Jamie Kennedy traveled to Utah in the Summer of 2013, to be a part of the filming of the full-length feature film, Nowhere Safe.  The long anticipated movie releases nationwide on DVD and BluRay, Tuesday, November 4.

Inspired by true events, Nowhere Safe follows the plight of a teenage girl who is forced to leave her school due to cyberbullying.  The movie shows the negative effects of bullying, as well as the difference one person can make by being a courageous upstander.

The movie is receiving top reviews from film critics and notable media personalities:

Annelie Rudlaff of Christian Film Database called it “one of the most powerful films I’ve ever seen.” The Dove Foundation gave Nowhere Safe its highest marks – 5 out of 5 Doves, as well as the “Family Friendly” seal.

New York Times best selling-authors, Richard and Linda Eyre, called Nowhere Safe “an entertaining and compelling story”, and Kristin Houghton of the Huffington Post said it is “a film that all should see, children as well as adults. Highly recommended!”