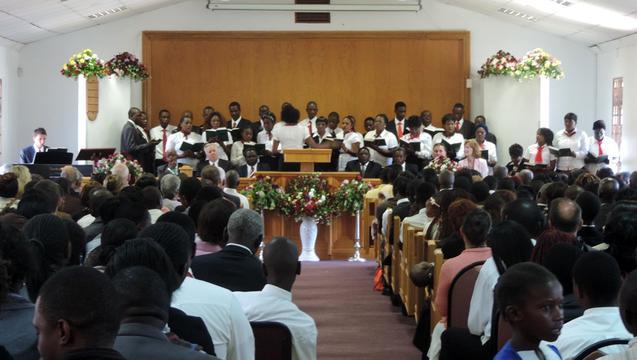 Saints Waited 23 Years for this Historic Church First in Africa

The Lusaka Zambia Stake was created on 15 March 2015 during a special conference of The Church of Jesus Christ of Latter-day Saints, held at the meetinghouse on Nangwenya Road in Lusaka.  The Lusaka Stake, the first in Zambia, is an executive unit comprised of approximately 2100 members in seven congregations within Lusaka.

During this historical event, Harrison Lumbama was sustained as the Lusaka Stake President with Counsellors Blessing Mashala and Chis Chansa.  President Lumbama and his wife, Maureen Kabulansando, have three children.  Introduced to the Church by Dr. Patrick and Edah Chikusu, he and Maureen joined in 1997.  He later served as the Munali Branch President (2000-2005) and most recently as the Lusaka District President (2009 - 2015).