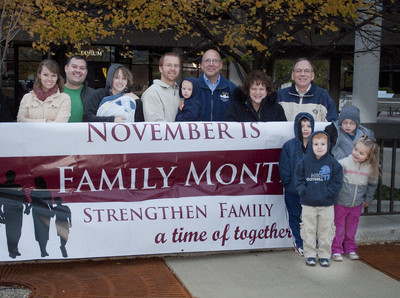 Saints participate in community initiatives to help focus on 'The Family: A Proclamation to the World'

One may not know anything about the many small cities that roll by the window when traveling around southwest Ohio; however, one thing all travelers might have noticed as they drive under an overpass along Interstate 675 is that families are valued. Throughout the Dayton Ohio East Stake, community banners have been raised that read: November Is Family Month, Strengthen Families, a time of togetherness.

These awareness banners hang in support of the 3rd annual community initiative sponsored by the Church's Dayton Ohio East Stake to strengthen families within their communities while making known "The Family: A Proclamation to the World," which was published by the Church in 1995. By invitation from Michael W. Stevens, president of the Dayton Ohio East Stake, ten city mayors in the greater Dayton area including Dayton, Springfield, Xenia, Beavercreek, Fairborn, Huber Heights, Troy, Piqua, Tipp City and Sidney issued city-wide proclamations declaring November as Family Month. Included in the invitations were copies of "The Family: A Proclamation to the World" sharing Latter-day Saint beliefs and values regarding families.