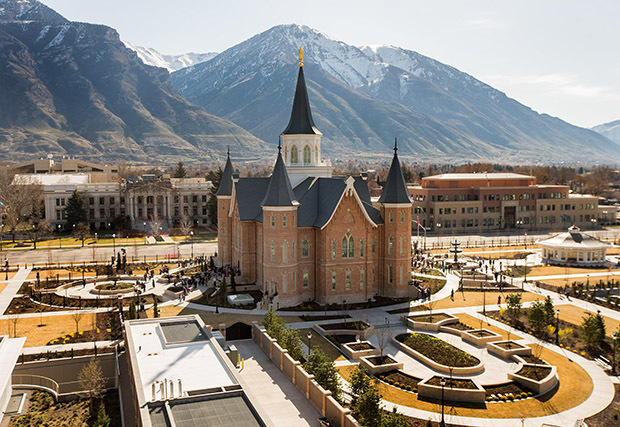 Yesterday, the 150th temple of The Church of Jesus Christ of Latter-day Saints was dedicated: the Provo City Center Temple. Prior to the dedication, 4,500 youth from Utah County participated in a cultural celebration at the Marriott Center. See photos and video from this incredible and historic event in our Church history.

The Provo City Center Temple, the 150th operating temple in the Church and the second in Provo, was dedicated March 20, salvaged from the ashes and scorched walls of the pioneer-era Provo Tabernacle as if to symbolize the spiritual rebirth and renewal that comes from receiving temple blessings and returning frequently.

Elder Dallin H. Oaks of the Quorum of the Twelve Apostles, whose boyhood roots run deep in Provo and the surrounding Utah Valley, presided over the three dedicatory sessions throughout the day.

Elder Oaks conducted the traditional cornerstone ceremony near the beginning of the first session, while the sun rising over the Wasatch Mountains to the east bathed the red sandstone of the temple’s wall in a brilliant glow under an all-but-cloudless, royal-blue sky.

“Thank you to the many who have gathered here on University Avenue to witness this symbolic completion of the Provo City Center Temple,” Elder Oaks said to about 300 onlookers gathered on the temple grounds on the east side. “That symbolic completion is our placing some mortar around this portion of the temple, which represents in a symbolic way the cornerstone and which will have a box of important artifacts placed within it.” 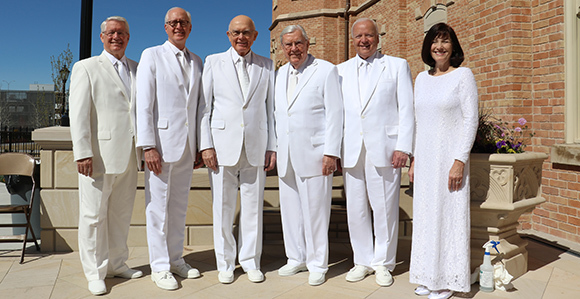 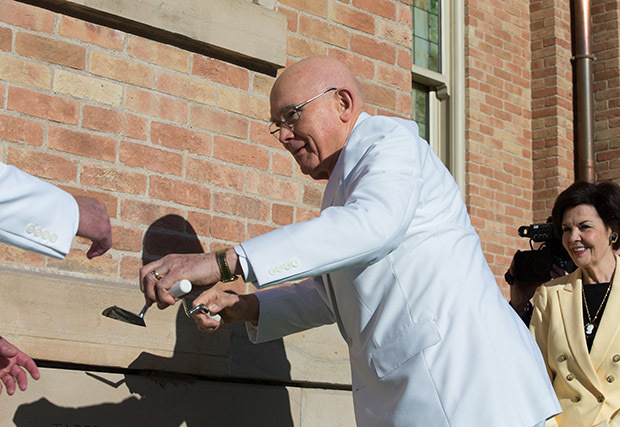 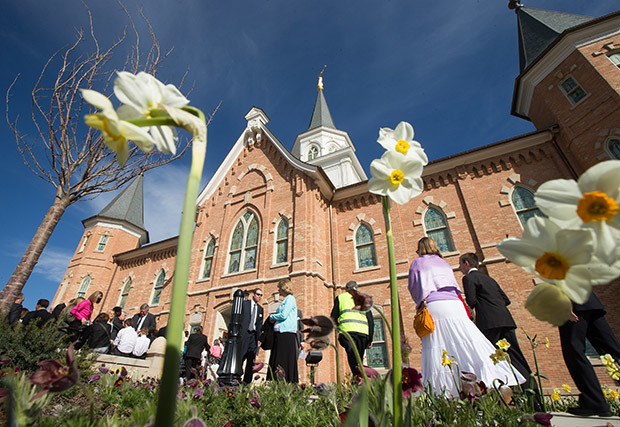 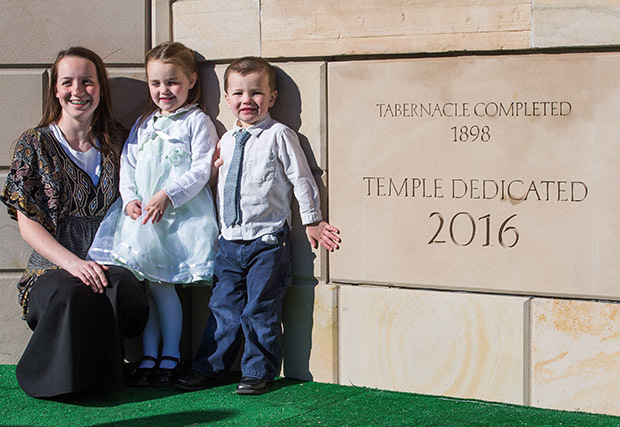 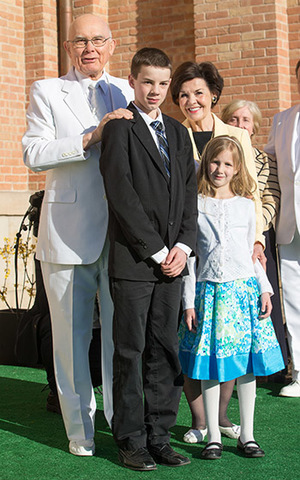 More than 4,500 youth from the Provo and Springville areas showed their enthusiasm for the dedication of another temple in Provo through music and dance on the evening of March 19.

“I am thrilled to be with you,” Elder Dallin H. Oaks of the Quorum of the Twelve Apostles said in his opening remarks at the event. After 45 years and countless memorable events held in the Marriott Center on the BYU campus, “now we add to that great list of occasions our gathering here for this cultural celebration preceding the dedication of the Provo City Center Temple,” he said.

When developing the program, Polly K. Dunn of the Hobble Creek 5th Ward, Springville Utah Hobble Creek West Stake, who directed the cultural celebration, said that everything came back to the Provo Tabernacle. “This building had an incredible life,” she said. “This building that was built by pioneers without electricity, without power tools, without even running water—it had such an incredible life. I felt from the get-go that the program needed to revolve around this building.”

Pioneer history, personal sacrifice, patriotism, the arts and service were represented in dance numbers and song. The theme of the program, ‘Beauty for Ashes,’ was also inspired by the fire that destroyed the Provo Tabernacle in 2010 as well as scripture found in Isaiah. 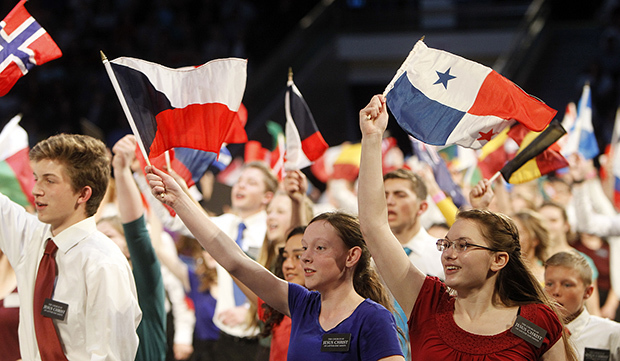 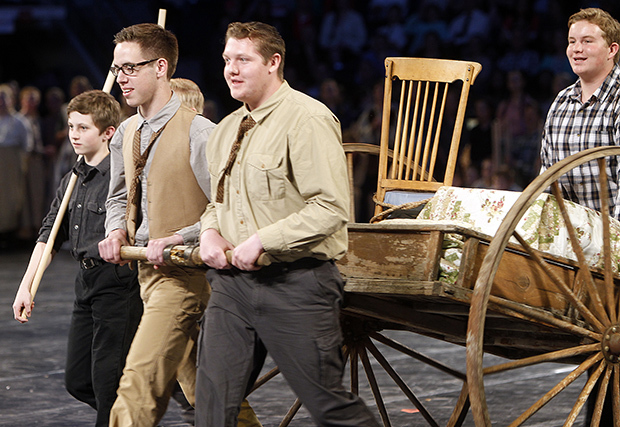 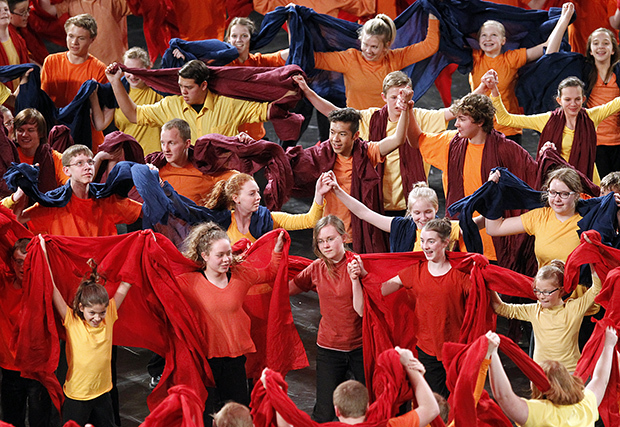 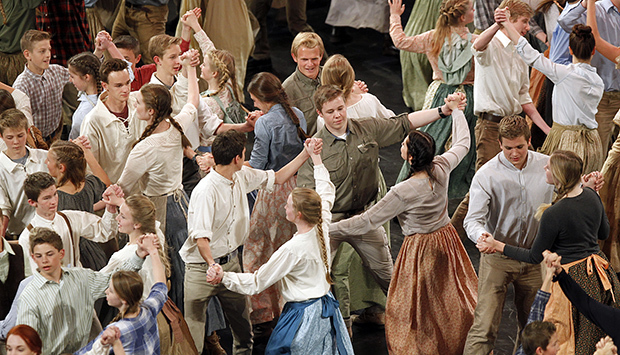 ► For more photos and the rest of the story, visit LDS Church News.