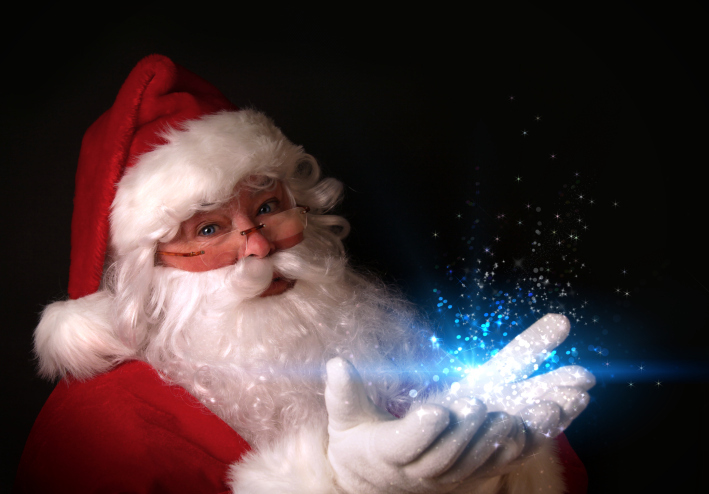 Stomach trembling, I looked up into my mom’s eyes as she tucked me into bed and arranged my menagerie of stuffed animals around me. Then I asked her the Santa question.

With her answer, the enchantment of Santa and his magic disappeared like a sandcastle gobbled up by the rising tide.

It's one of the painful parts of growing up—losing the Christmas magic for a time until we realize that it can return again when we create it for others.

But learning the full story of Santa was difficult for me in other ways—it laid the seeds of doubt in my mind about my parents always being truthful with me; it shook my trust in them. I wondered how they could say that they always told me the truth and yet had encouraged me to believe something false. Of course, when I grew older, I realized that my parents hadn't tried to deceive me; they'd just wanted me to experience the excitement of Santa's magic like they had when they were children.

After I married and my husband and I had children of our own, we thought deeply about how we would celebrate Christmas. We agreed to keep Christmas centered on the Savior while also creating the excitement and magic of Santa. We kept our focus on the Savior by reading scriptures and inspirational stories, keeping our gift budget small, and ensuring that at least half of our holiday decorations were religious.

As our children grew, my husband and I discussed how we were going to handle the "Santa question." We were determined to find a way to have Santa without creating confusion about trust and honesty. I was surprised that many other mothers were experiencing the same dilemma—how to provide Christmas magic and also keep the confidence of their children when the secret was revealed—but they, too, hadn't come up with a satisfactory solution.

My answer finally came in 1996 during a First Presidency Christmas Devotional. In his talk, President James E. Faust encouraged us to show our love for the Savior by emulating Him. The true spirit of Christmas, he said, was about serving others just as Jesus did. He pointed out that the highest form of service was anonymous and mentioned that Santa symbolized the spirit of anonymous giving. The light bulb went on! I realized there was a way that my husband and I could dovetail our desire to keep the focus of Christmas on Christ and prepare our children for the "Santa talk."

The next day, I went to the local dollar store and purchased a small nativity for each family member, including my husband and me. Every few days during the next two and a half weeks, these nativity figures—beginning with the animals and ending with baby Jesus—mysteriously appeared on our kitchen table along with a note signed by the Christmas Spirit. The note said that he was presenting these nativity pieces to our family to help us keep the true spirit of Christmas by reminding us of the real reason for Christmas—to celebrate our Savior.

The Christmas Spirit visited our house for a couple of years before our eldest child was old enough to learn about Santa. That year, just before the holiday season began, I visited with him in private. I told him that I was working on a very special Christmas surprise and needed his help. I revealed that I was the Christmas Spirit and that I'd like him to be my assistant. He literally leapt with enthusiasm. I told him that he had to keep it a secret so that his sisters would not know where the presents came from. Together, we went to the store and picked out three inexpensive Christmas ornaments for each family member that featured the religious symbols of Christmas—angels, stars, and so forth. Throughout the month, I did all I could to build on his excitement and help him feel the joy of anonymous giving. Before setting out the ornaments at night, we would tiptoe through the house, trying not to giggle, and make sure everyone was asleep. When the gifts were discovered the next morning, he and I put on a big show of surprise, giving one another knowing grins.

A few days after Christmas, my husband and I met with our son to discuss his experience. First, we reminisced about everything we’d done that holiday season, then we asked, "What was your favorite thing?"

Without hesitation, he exclaimed, "Being the Christmas Spirit!"

"Why do you think that was the best part?" we asked.

"Because it was fun! No one knew it was me giving the presents!"

Together, we explored the reasons that anonymous giving brings such joy and satisfaction. We told our son that parents love to give anonymously to their kids at Christmastime, too. We said that we had a special secret about how we gave presents to him and his sisters without them knowing that they were from us. Then we asked him if he could guess who Santa Claus really was. He laughed as he connected the dots. He was so pleased to be grown up enough to share in our secret. We told him now that he was old enough to know about Santa, he could be Santa's helper and fill the Christmas stockings next Christmas Eve. We also asked him to promise us that he would not tell his sisters (or any other children) what he now knew about Santa so that we could remain anonymous. Our conversation ended with big hugs, excitement about Josh's growing up, and increased feelings of love and trust.

We followed this same pattern with each of our children as they became old enough to understand the role of Santa.

Our children are all teenagers now, and we still continue our tradition. Over the years, the Christmas Spirit has brought a variety of gifts—all focusing on the Savior. Some gifts are directly linked to Christmas; others are simply Christ-centered. We keep our gifts inexpensive and often purchase them at clearance sales, at dollar stores, or from the Church Distribution Center. Through this tradition, we have built up gospel libraries for our children and provided them with Christmas decorations they can use when they have homes of their own. Most importantly, we've kept the focus of Christmas on Christ and have built bonds of trust with our children.

If you ask our children about their cherished Christmas memories, they are sure to mention the year that they got to be the Christmas Spirit and learned about Santa.

President James E. Faust stated, "Anonymous giving reflects the Savior's love. Those of us who contribute anonymously have sweet inner feelings of the Spirit that swell inside when we do something for others that cannot be traced back to ourselves. Anonymous giving gives the gift a higher form of sanctification" ["First Presidency Focuses on the Savior at Devotional," Ensign, February 2007, 74-75].

Makes You Think Holidays Christmas Service Charity ServiceHolidays,Christmas,Service,Charity,Service,Makes You Think
Comments and feedback can be sent to feedback@ldsliving.com