Sariah, Laman, Lemuel + More Actors in New Church Videos Share What It's Like Portraying Lesser-Known Characters in the Book of Mormon

Past the gravel roads, a dairy farm, and a street sign with the name Cumorah Drive near Goshen, Utah, lies something straight out of 1 Nephi—the Church's Book of Mormon video set.

As part of the Church's video series, the site in Goshen reuses the backdrop of the Jerusalem set used in the New Testament videos to portray the life of Nephi, Sam, Laman, Lemuel, Lehi, Sariah, and others in 1 Nephi 1–18, the first segment of videos.

"It just blows my mind to think Nephi is the character I'm going to play and make him relatable to the everyday person," 17-year-old Jackson VanDerwerken says, dressed in full costume and standing in front of the set for the house of Ishmael.

With ample warnings to watch out for rattlesnakes, scorpions, and sideways kicking camels, not to mention the temperature hovering at around and sometimes above 100 degrees, it can be challenging in more ways than one to portray one of the Church's most well-known ancient families.

And while the scripts are approved by the General Authorities of the Church and those working on the videos, portraying some of the members of this ancient family takes some introspection.

"It's a daunting task and a blessing at the same time," Rick Macy the actor for Lehi says about his role. "I certainly didn't want to portray him as . . . well you know, he'll be this iconic, booming voice type of prophet, knowing all, seeing all. I wanted to portray him as a man. As a man who had a family, the dynamics of the family structure not unlike most of our families." 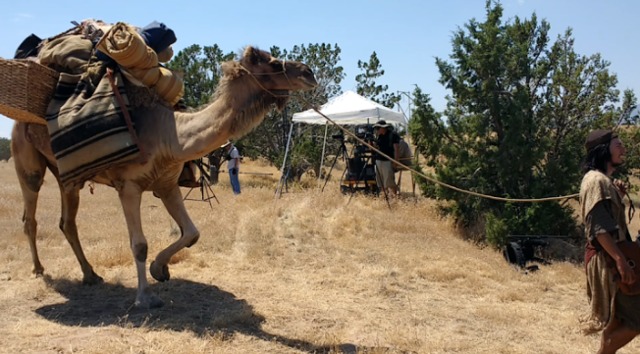 Cooper Sutton, the actor for Lemuel, leads a camel on set after the filming of a scene from the Book of Mormon videos.

Part of the Church's efforts with these videos has been to make the women mentioned in the Book of Mormon more visible, Kymberly Mellen, the actress portraying Sariah, says.

"Sariah is not just present as a murmuring presence, but present in terms of a spiritual leader in her own right, a very active parent sometimes at odds with the fatherhood figure, which I think women and wives can relate to as well," Mellen says.

Surprisingly, another character audiences might find themselves relating to could be Laman. Though used as an example of the behavior members of the Church should avoid, and rightly so because of his sometimes violent and murderous behaviors, there are elements to Laman in the Book of Mormon some member could relate to.

"I love playing Laman," Mace Sorenson says. "I think he's a lot more complicated than we give him credit for and I think people relate him a lot more than they would Nephi or Lehi because a lot of his questions are honest questions that people would ask in real situations." 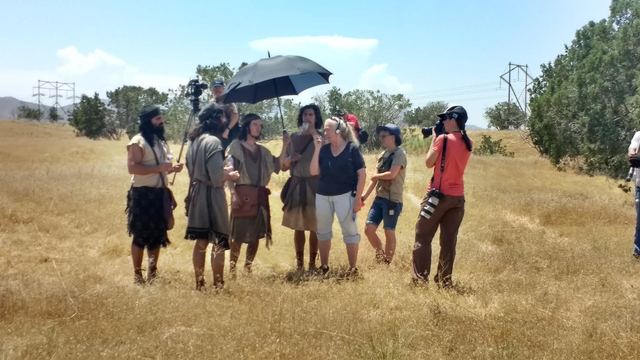 The actors for Nephi, Sam, Laman, and Lemuel take a short break from filming a scene from the Book of Mormon videos.

For others, making the characters of the Book of Mormon more relatable has the added challenge of them being mentioned only briefly in the scriptures.

Sam Petersen, the actor for Lemuel, said it was challenging to fill in the blanks for his character, but in the end this challenge helped him to shape an independent character instead of an appendage of his older brother, Laman.

"I think Lemuel knew what he was doing," Petersen says. "I even think at some points he got sick of Laman and challenged him at some points if he thought he went too far but, obviously, he did his fair share of beating Nephi and doubting."

The third brother of three boys, Cooper Sutton, the actor for Sam, says while his two older brothers are nicer than Laman and Lemuel, he drew on those experiences with his brothers to portray his character in the videos.

But along with his own experience, he also drew from what little the scriptures say about Sam and how Sam stood by Nephi without seeking acknowledgment.

"I focused on the main things that he believed in Nephi, and we find out later that Lehi rejoiced because of Sam in the tree of life vision," Sutton says. "So if I were to put Sam in character, I wanted all of my reactions to reflect my belief in Nephi's words and I wanted to be more of a family man as far as my father rejoices in me and I've grown up believing in my brother and he loves his mother very much and he is always there as a supportive character."

"Everything done here is through the Spirit of God. All decisions made are guided with the Holy Ghost and the Lord is the head of this work," VanDerwerken says.