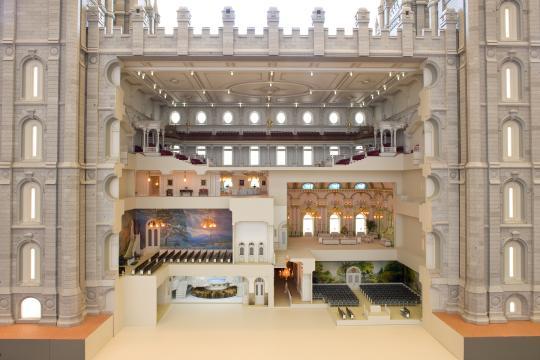 More than a century has passed since the public open house was held for the Salt Lake Temple, but an exhibit featuring a 1:32 scaled replica of the Mormon temple opened today that offers an open house experience of the magnificent building. Earlier this morning, The Church of Jesus Christ of Latter-day Saints unveiled the 88-inch tall, near-identical replica of the temple in the South Visitors’ Center on Temple Square. The permanent exhibit will be open to the public starting at 1:30 p.m. today.

“This replica will show the millions of visitors who come to Temple Square the beauty and majesty of this sacred and historic building,” said Elder Richard G. Hinckley, executive director of the Missionary Department. “Like all temples, once the building is dedicated it is used for sacred Church purposes and not open to the general public, but this exhibit will provide the public with a glimpse of the interior and a feeling of the Spirit that is present there.”

The Salt Lake Temple is a landmark known throughout the world. When it was last open to the public in April of 1893, the local press reported that approximately 5,000 people, most of whom were not members of the Church, toured the temple before the dedication. The reports went on to say that “altogether the richness and elegant workmanship of the temple was a revelation of wonder to the visitors.”