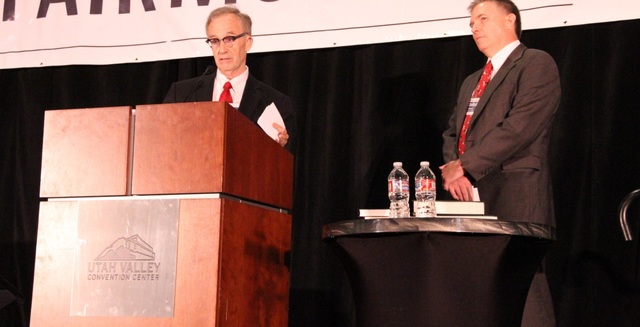 The latest products of professor Royal Skousen’s Book of Mormon Critical Text Project have just appeared: two massive books with the title of The Nature of the Original Language.

With the collaboration of independent linguist Stanford Carmack, Skousen argues in The Nature of the Original Language that virtually all the language of the Book of Mormon, including the features that critics have often derided as “bad grammar,” is found in Early Modern English—which is typically defined as the form of the English language that existed between the late 15th century, in the early Tudor period when Middle English become obsolete, and the time of the Restoration (of the English monarchy) in the mid-to-late 17th century.

Altogether, Skousen identifies about 80 word uses, phrases, and expressions that had actually disappeared from English between one and three centuries before the Book of Mormon’s publication in 1830. Meanwhile, Carmack discusses Book of Mormon syntax, pointing to aspects of it that exist in neither the King James Bible, nor Joseph Smith’s writings, nor in the pseudo-biblical writings common to his time, but that were prevalent in the English of the later 1500s.

Several sections of The Nature of the Original Language are dedicated to showing that virtually every expression that scholars and critics have proposed as representing the language of Joseph Smith’s time turns out to have existed in earlier English, including such striking expressions as “to endure the crosses of the world” and “to sing the song of redeeming love.” Some of these, indeed, are truly archaic expressions that died out of English prior to 1600 and that would, accordingly, not have been used by Joseph Smith in his own language.

In Skousen and Carmack’s view, all of this linguistic evidence (with strong support from the eyewitnesses to the translation process) indicates that Joseph Smith was not the author of the translated English-language text of the Book of Mormon; instead, he received it word for word from the Lord by means of his translation instrument.

Finally, Skousen argues that the religious, social, and political themes of the Book of Mormon do not derive from Joseph Smith’s time (contrary to another prominent claim from Campbell), but are actually more reminiscent of issues that were hotly debated during the Protestant Reformation. In other words, they too appear to date from the 1500s and 1600s rather than from the 1800s. Skousen believes that the Book of Mormon would have resonated much more strongly with the Reformed and Radical Protestants of the 1500s and 1600s than with the Christians of Joseph Smith’s time.

How do Skousen and Carmack explain their findings? They don’t. They’re certainly not arguing that the Book of Mormon was composed during the English Reformation, but they see their principal task as accurately describing the linguistic features of the text. Everyone is free to speculate, but only on the basis of solidly established evidence.

On Tuesday, Sept. 25, at 7 p.m., Skousen and Carmack will discuss The Nature of the Original Language in presentations in the Assembly Hall of the Hinckley Center at Brigham Young University. The event—jointly sponsored by BYU Studies and the Interpreter Foundation—is free and open to the general public. Parking will be available after 6 p.m. in the large lot directly east of the Hinckley Center (Lot 16).

The events of the evening will be videotaped and made available in the weeks ahead. For further information, contact BYU Studies (801-422-6691 or byustudies@byu.edu).