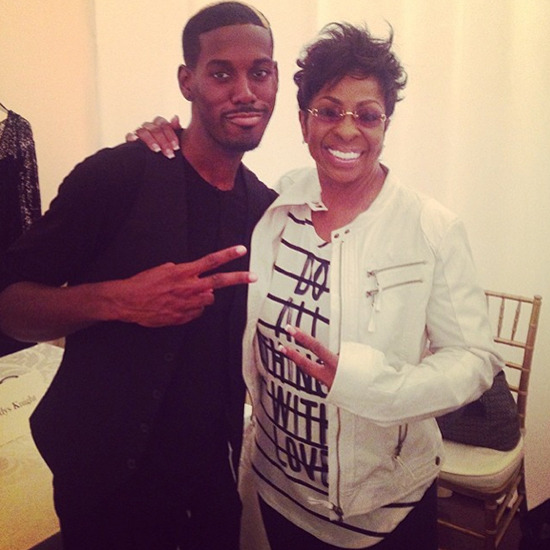 Gladys Knight. We know and love her. We've listened to her sing with the Mormon Tabernacle Choir. We've fallen in love with her latest CD. We've heard her conversion story. But we bet you didn't know all seven of these fun tidbits about the "Empress of Soul."

1. Her CTR ring was custom-designed specifically for her.

Gladys was first introduced to The Church of Jesus Christ of Latter-day Saints by her children--and she loved the simplicity of Gospel concepts, in particular, the slogan CTR.

As an adult convert, Gladys Knight was first introduced to the concept of the CTR reminder ring through her grandchildren. She recalls, "One of the kids was wearing a little CTR ring, and it was a little one because they were in Primary then. And I thought wow, what a concept."

Though still new to the Church, immediately she said, “'I want one of those.' And then I found out that you could have one of those, it wasn’t just for the kids!"

But just how did her gold and diamond CTR ring come to be? "My daughter had a friend that she went to high school with who turned out to be a jeweler. So I took the basic ring to him, I said, 'I want a diamond CTR ring.' And he said, 'Well, I don’t know. The shape of it kind of limits you.' And I said, 'I’m not talking about a diamond ring like a diamond ring, I just want it.' So he made this for me. And I came back to get it and I’ve worn it ever since."

For Gladys, more than what it's made of, it's what the ring stands for that's so important. "It’s a reminder for all of us on a daily basis," she says. "You know, choose the right. No matter what the situation is, choose the right."

And that's a message Gladys believes all people need to have, she says, "whether they’re members of this church or not. The whole idea is that we need every little bit of everything we can get to stay on that path, because it’s that narrow."

In fact, the message of the ring is so important to Gladys that even when she has to take it off, she doesn't let it lay down, but gives it to an assistant to keep until she can put it back on herself.

Gladys's assistant Zora, whom she calls Blondie, started wearing the ring as the best way to keep it from getting lost. Gladys recalls, "Usually she’ll take it off and give it to me, but then a few times she wore it home." She shares that Zora asked, "'That C, that CT, what’s that CT?'" Gladys laughs, saying, "She could never get it right. I said 'Choose the right, Zora, choose the right.'"

While the ring is still one-of-a-kind today, it may not remain that way for long. "Zora loves this ring so much, I’m going to get her one."

2. Her favorite scripture story is of Christ's resurrection.

"I like the whole story of Christ’s Resurrection," she says. "Peter was with Him the most in that story." Speaking to when Christ appeared to His apostles, she explains, "It was so hard for them to believe it was Him."

It's how that disbelief relates to us today that really makes the story hit home for her. "It’s the same way like we are now--that’s why it’s so important to me. We’re doing the same thing that they did to Him back then with the way that we live, the choices that we make." Though we often still struggle to believe, she points out that hope is a pivotal part of the Resurrection story: "He went through all of that to prove to us who He is and who our Father in Heaven is." It's understanding and believing that which builds the foundation for faith.

3. She introduced the Jackson 5 to Motown.

Music lovers should remember Gladys Knight for more than just "Midnight Train to Georgia" and "Heard it Through the Grapevine." The famed Jackson 5 owe their start in Motown to the singing legend.

Gladys first saw the Jackson 5 perform at the Apollo Theater in the 1960s. After they won the Apollo contest on August 13, 1967, she sent their demo tape to Motown Records, who initially rejected the group. Persistent, Gladys plead their case to Berry Gordy. According to Gordy, the group was “the last big stars to come rolling off my assembly line.”

As the 60s drew to a close, they finally signed with Motown Records. Diana Ross eventually introduced the Jackson 5 to the public, but it was Gladys who is credited with the initial scouting of the group, whom she continued to correspond with--especially the young and incredibly talented Michael Jackson.

4. She sang at Michael Jackson's funeral.

When "The King of Pop" was laid to rest, "The Empress of Soul" paid her respects. Gladys's rendition of "Our Father" (The Lord's Prayer) reportedly moved many to tears. She also performed "His Eye Is On the Sparrow" as part of the services.

Watch what she had to say about the event after the service--and make sure you catch her subtle testimony of the plan of salvation starting at 2:40.

5. She has a protege she's training: Avehre.

Just this year, Gladys Knight has introduced a new artist to the Motown scene: Avehre.

Described as a sensual and passionate crooner, Avehre (Brandon Avery Smith) is stepping forward from Gladys's list of background singers to start his own R&B stylings. While Avehre has released a few singles already, his talent really shines under Gladys's tutelage.

"Avehre," she says, "is my protege. He wrote two of the songs on the album [Where My Heart Belongs]." His vocals are also featured in the two tracks, "Immersed" and "Champions."

Later this year, Avehre is expected to release his debut album, and his musical stylings are some of Gladys's favorite songs to listen to. She says, "I love the way he writes.... So that's on the top of my music list right now."

6. Her favorite hymn is "There Is a Green Hill Far Away."

When Gladys Knight first joined the Church, one hymn in particular spoke to her: Green Hill.

"That was the one that touched me when I first joined the church," she says, "because of the way that it’s written. You know, it’s not on the cross, in your face, the way it’s written. Rather, 'There is a green hill... far away.' It’s about the cross and what that really means in our lives and that kind of thing."

She continues, "It’s a reminder song, to tell the truth. Because you tell the people about that time that this is a place without city walls, just in case you didn’t know. And he hung there, and he suffered, and he died. It’s a reminder. If we know how important that is to our salvation, then that song should resonate within your heart, how important that sacrifice was."

"There is a Green Hill Far Away" is a featured track on Gladys Knight's new album, Where My Heart Belongs.

When Gladys isn't listening to her own music or the music of her protege, the country genre has her heart.

"I love country music," she shares. "Give me the twang, give me the everything." The subject matter in particular draws her to the genre. "It’s the bare bones, life slice that country people write about. It’s not all fluff. It really has nothing to do all of the time even with the tempo, and it’s clean most of the time. So I like that."

Some of Gladys's biggest hits were actually from a country writer, Jim Weberman, who did “Midnight Train to Georgia,” “You’re the Best Thing that Ever Happened to Me,” and “Neither One of Us Wants to Be the First to Say Goodbye.” Of Weberman, Gladys says, "We have a kinship, it seems, when it comes down to the music, even if he’s a country artist and writer."

And while country is her favorite, Gladys has a love for all types of music. "The only music I can’t really get into," she explains, "is the kind with all of the profanity. I can’t deal with that. It messes with my spirit. I can’t do that."