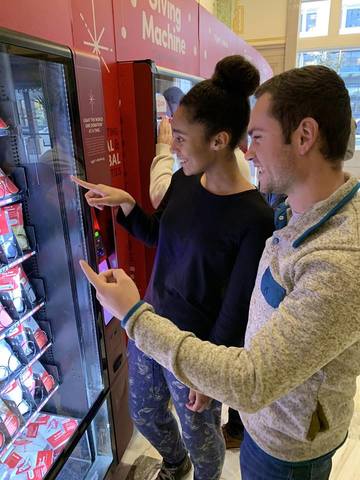 See the Final Tally for the #LightTheWorld Giving Machines

The giving machines for the Church's #LightTheWorld campaign raised more than $2 million dollars over the holidays, according to a Facebook post from LDS Charities.

► You'll also like: Church Announces the #LightTheWorld Giving Machines Have Made Over $1 Million

In addition to the giving machine at Temple Square, the Church added four other machines in London, the Philippines, Arizona, and New York in 2018. Combined, the machines raised $2,309,276 for various charities.

Thank you for helping #LightTheWorld through donations at the Giving Machines. Your generosity helped raise $2,309,276 for our local and international partners.

In 2017, the giving machine at Temple Square received more than 23,000 donations, including everything from eyeglasses to food to water filters.

"I myself bought a goat,” Sister Sharon Eubank reported in the video about the 2017 donations. It's amazing to see the difference these giving machines have made as members have tried to #LightTheWorld.