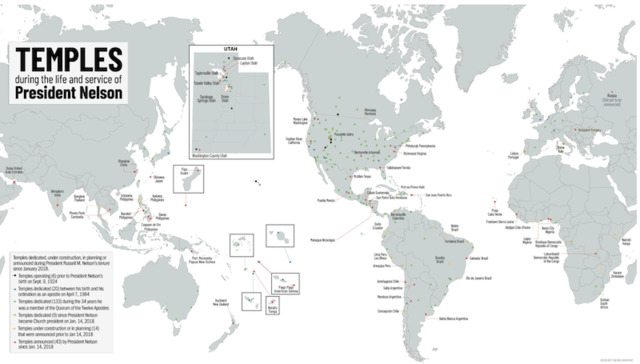 During his April 2020 general conference address, Elder David A. Bednar of the Quorum of the Twelve Apostles shared some of those statistics, noting that in 1980, the Tokyo Japan Temple was dedicated, bringing the total number of temples worldwide to 18. There are now 168 operating temples throughout the world—many of which have been dedicated during President Nelson’s lifetime.

► You may also like: A Look at Temple Growth in President Nelson’s Lifetime

At the end of April 2020 general conference, President Nelson announced an additional eight temples, bringing the total number of temples under construction or announced to 57.

Recently, the Church News showed where the Church's temples are located throughout the world, according to a timeline of President Nelson’s life and service. The maps pinpoint the six temples that were operating at the prophet’s birth, 20 temples that were dedicated in the next six decades, and 133 temples that have been added since his call as an apostle. They also show the 14 temples under construction before President Nelson was called as prophet in 2018, nine temples dedicated during his tenure, and the 43 temples that have been announced since.

SEE THE MAPS ON thechurchnews.com.