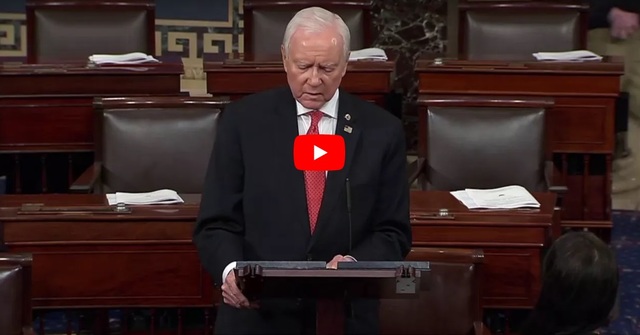 On the Senate floor Monday, Senator Orrin Hatch paid tribute to President Thomas S. Monson, his "dear friend" and "a beloved leader whose love of God and his fellow men defined a lifetime of selfless service."

Senator Hatch spoke of our prophet as "an extraordinary man" with "boundless charity . . . who we have looked on as a prophet, seer, and revelator." Senator Hatch joined the ranks of Senators Jeff Flake and Mike Lee who honored President Monson's life on the Senate floor last week.

One of the defining characteristics of President Monson was his selfless service, Hatch noted, "Whether as a prophet or an apostle, a mission president or a friend, President Monson simply took care of people."

"President Monson's example of intimate, individual ministry underscored what was most remarkable about his leadership. Although he presided over a church of millions, his focus was always on the one. Although tasked with making administrative decisions affecting thousands of people the world over, his lifelong commitment was to serving individuals in need," Senator Hatch said. "He was perhaps the greatest living example of Christ's admonition to find the one lost sheep who has gone astray."

Summing up President Monson's life of devotion to serving Church members, Senator Hatch then shared a quote from Elder Joseph B. Wirthlin: "Tom has given everything to those people, including the shirt off his back. I mean it! I’ve seen him give away his suits and his shirts and his shoes."

Senator Hatch continued, "President Monson was one of the greatest men I have ever known. Service was his motto and humility his hallmark. Countless were the lives he touched as a prophet, father, and friend. He emulated Jesus Christ in every particular, helping all of us draw closer to God by drawing us all closer to each other."