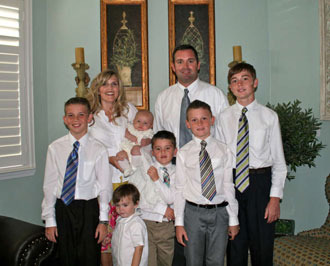 Sense of greater purpose, unity has grown in wake of Bishop Sannar's killing

Editor's note: Journalist Cathy Carmode Lim, a member of the Visalia 2nd Ward, was asked by the Deseret News to recount how church members there have coped with the tragic shooting of Bishop Clay Sannar.

It's a warm, friendly ward that just feels like home. But the events of four months ago have brought a tight-knit group even closer and created a place that feels sacred.

On Aug. 29, 2010, Bishop Clay Sannar, 40, a devoted husband and father of six boys, was shot to death at the ward building after church services by a man who came in looking for the ward's leader. Kenneth Ward, 47, was said to be mentally ill. He was shot to death by police not long after he called them to identify himself as the gunman.