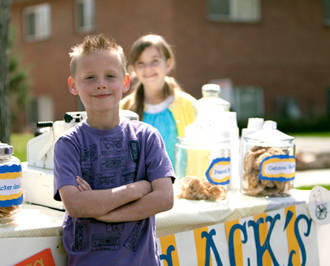 Zack's back and with all the energy a 7-year-old can muster. Last year, Zackary Bird's lemonade stand in Provo, Utah, raised enough money for one wheelchair (see video here). He donated the money to LDS Charities.

Zack got the idea at his school, Wasatch Elementary, where classes were raising money for wheelchairs following the Haiti earthquake. This year, sales increased tenfold, and Zack raised enough money for 10 wheelchairs — all in a single weekend.

"He'd been bugging me for weeks, asking when it would be time to set up his lemonade stand," said his mother, Nancy Bird. "He kept saying, 'Put everything on Facebook.' This morning, he got up and said, 'Is it time? Let's get the cookies made!' He could hardly contain himself. He even said, 'If we get enough, maybe we'll even buy a (clean water) well.' I told him that we should just focus on one thing at a time."

"We put the fundraiser details on Facebook," said Nancy. "I sent the information to everyone I was friends with, and they sent it to their friends — about 500 people in all. Before we even set up the stand, we had received about $150 in the mail from people who couldn't come."