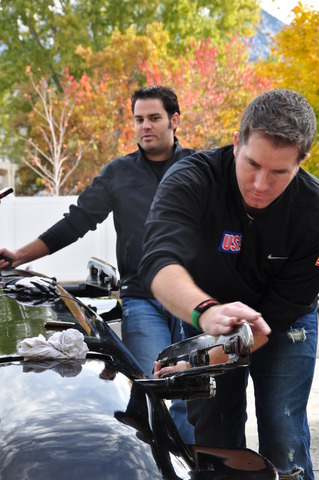 Sharing the Gospel at 90 mph

Weighing more than 350 pounds and traveling at almost 90 miles per hour, Team Holm uses bobsledding as a tool for sharing the Gospel.

Jeremy Holm, the team captain, said he decided at a young age that bobsledding was his calling to share the Gospel in a very exhilarating and powerful way.

At age 17 he was given the opportunity to ride in a bobsled and immediately found his life's passion. Taking only a two-year break from bobsledding to serve a mission in Honduras and Belize, this is his life and people can see it as soon as they meet him.

“Throughout the years I’ve had a lot of friends and family come up and watch me train or race, and they all say the same thing," Holm said, "they all say that I’m a totally different person, I’m so focused, that I’m more happy than I normally am. It’s like that place is my home.”

Many people would consider this a crazy and wild way to live life; however, Holm considers it a blessing and loves sharing it with everyone.

One person Holm has grown especially close to through bobsledding is Don Osmond, Donny Osmond’s son. They met in Provo while both working for a local magazine. Holm admits he didn’t really know what to think of Osmond at the beginning, but after a while, they became really good friends.

Osmond read an article Holm wrote about bobsledding and asked him to take him for a ride. Holm finally gave in to his request and, without any training at all, Osmond accompanied Holm to the track in Park City. On their way there, Holm explained what needed to be done and that was all the training Osmond had.

“He told me, ‘Ok just run and as soon as you feel like you can’t run anymore to keep up with the bobsled, jump in and hold on. . . . At the end I am going to bump you on the helmet and that’s when you pull the brakes,’” Osmond recalled.

As they got to the top of the mountain, looking down the track, all Osmond could see was a massive, frozen waterslide. He admitted to being very nervous.

“I was not prepared for what I was about to experience,” Osmond said. “I felt a lot of pressure and I was laughing so much that I couldn’t breathe because of the G-forces. I blacked out.”

Holm had to hit him on the helmet a couple of times until he came out of it, just in time to pull the brakes; however, they still hit the wall of ice at the end of the track, pouring slush all over the top of the bobsled. Still a little dazed, all Osmond could say was, “That was fun! Can we do it again?”

And he did. Osmond and Holm have been bobsledding together now for the past three years. Today they are getting ready for the new season, which starts in two weeks.

Since 1997 when Holm started his career in bobsledding, he has experienced ups and downs, victories and disappointments; but according to him, these are what make the sport so exciting and unique. He compares bobsledding with life: just like athletes crash in bobsledding, in life you also have those moments when you crash, then have to decide whether or not to stay defeated or get up and start a new day with new goals.

“What I realize,” Holm said, “is that in life sometimes we feel like we do crash, we feel like it is out of our control, we are powerless, we hit the low point—the breaking point—and it really is only when we reach up, or at least reach out, that makes the difference.”

Holm compares his life in bobsledding to the parable of the talents and tries to use it very wisely to make a difference in people’s lives, especially the youth. The team is very involved in different service projects and causes. They have worked with Relay for Life, Team Darfur, the Gold Medal school program, Athletes for Hope and the Boys and Girls Club. They make sure they give back a little for all the blessings they have received and try to make a difference in the lives of others.

They teach others through the metaphor of bobsledding. Holm compares the ice track to life:

“The ice track has what is called a track crew, and these guys get out there and clean the ice with scrapers. They scrape the ice clean and … patch up the holes … and spray a new layer on. If you come back in an hour it looks brand new. I mean, we can do that with our lives, especially through repentance. We can all get back up there and make something of our lives. I mean, we might think that it’s too late, but it’s never too late.”

Osmond said it doesn’t matter what people do in life, if they are making a difference, that’s what their calling is, whether that is school, work, extra curricular activities or bobsledding, as long as people are living their lives properly and being a good example.

“Everybody has a role to play in life, big or small, bobsled or soccer, music or sports, it really doesn’t matter,” Osmond said, “because we are always surrounded by different people who can touch our lives and if we are living an example conducive of the spirit, then people are going to recognize it. That is our calling in life, that is our mission in life.”