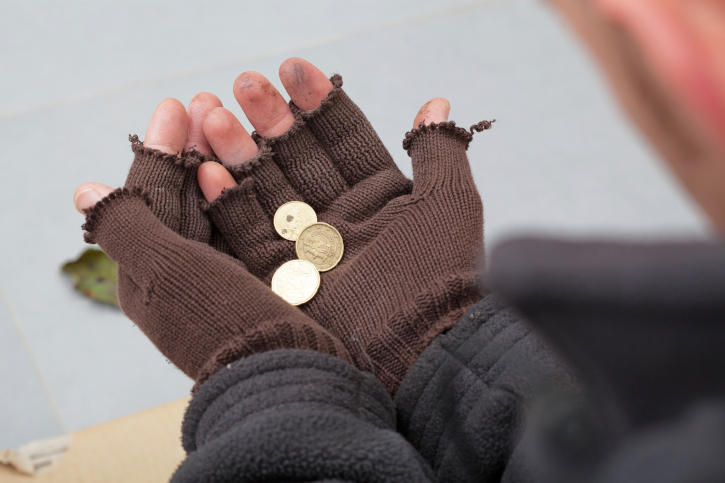 Should Mormons Give Money to Panhandlers?

We’ve all read, or at least heard something similar to the words of King Benajmin in Mosiah 4, reminding us that we are all beggars in the sight of God and telling us “ye will not suffer that the beggar putteth up his petition to you in vain, and turn him out to perish” (Mosiah 4: 16). He also tells us not to judge these people and say to ourselves, “The man has brought upon himself his misery; therefore I will stay my hand, and will not give unto him of my food, nor impart unto him of my substance that he may not suffer, for his punishments are just” (Mosiah 4:17).

We’ve also heard the story of Lazarus the beggar in the Bible and countless other stories resounding with lessons of judgment and charity in church magazines. We’ve heard or read conference talks and even sung the beloved hymn ‘A Poor Wayfaring Man of Grief.’ But exactly how far should our non-judgment go?

When I first moved to downtown Salt Lake City, one of the biggest things that bothered me was the number of people who asked me for money. I had to take the train to school everyday, and inevitably I would run into one person outside my house and at least one or two more on the train platform.

At first, I would give a couple dollars or coins here and there or pull some fancy moves to avoid the path of someone asking for money. I listened to dozens of sob stories involving children in hospitals to not eating in days to trying to get enough money for new shoes necessary for a new job. I've endured being called selfish, knocks on my car windows, and, most commonly, an ever-present guilt when turning people away.

Whenever I'm approached by someone asking for money, I feel like I am hardening my heart to those in need. But my practical head knows I can't financially support myself and three people on the street, especially when those people may or may not be honestly in need. What's a girl to do? My quick fix to the problem was to quit carrying cash so that I could truthfully say that I didn't have anything to give, easing feelings of guilt from lying or judging legitimate stories.

Another way I have compensated for my feelings of mistrust and guilt is to pay a generous fast offering. But I don't know if this is the best approach. How do I find a balance between wise and righteous judgment and treating people as Mosiah directs?

Food for the Hungry
By Kelsey Berteaux

The first encounter I can remember with a panhandler will stick in my mind forever.

I must have been ten or so. Returning from a dinner at the local pizza place, the five children in the back of the van spotted a beggar on the side of the road with a sign that said something like, "Starving: will work for food."

Us being young and naive, we told our father to give the man our leftovers--a small box of still-warm pizza from our dinner. Dad scoffed, telling us that the man was probably lying and just looking for money. But in a way that only five wheedling voices can, we persuaded him to open the window and hand over our leftovers.

As we drove away, I looked back. The man took two slices of pizza, laid them on top of each other, folded them in half, and started shoving them into his mouth like he hadn't eaten in days. He hadn't been lying. He was starving.

Ever since then, I've always given homeless people the benefit of the doubt. But this has invariably led to my giving away so much money--to literally anyone who asked--that at one point, my husband had to take me aside and ask if we needed to start budgeting for my almost-daily giving. I hadn't realized it, but a dollar or two here and there had added up to hundreds we didn't have and left me wondering: how could I ever answer each beggar's petition without jeopardizing my own family's wellbeing?

In the past we've heard some interesting ideas about how to handle panhandlers, including carrying granola bars or packs of gum to give away instead of money, or offering to buy a meal for someone instead of giving cash. We've even heard of people who carry business cards with information about resources for the homeless in the area. These options still cost money, but they're a more direct help. And they're still a handout (not a "hand up," like Church welfare and other assistance programs focus on).

What advice would you give to those who face this problem? How do you handle panhandlers? If we pay generous tithes and offerings, should we give money to panhandlers? Take the poll below, and then tell us what your experiences are and what your advice is in the comments below.

Makes You Think Lifestyle Charity Hot Topics UsLifestyle,Charity,Hot Topics,Us,Makes You Think
Comments and feedback can be sent to feedback@ldsliving.com