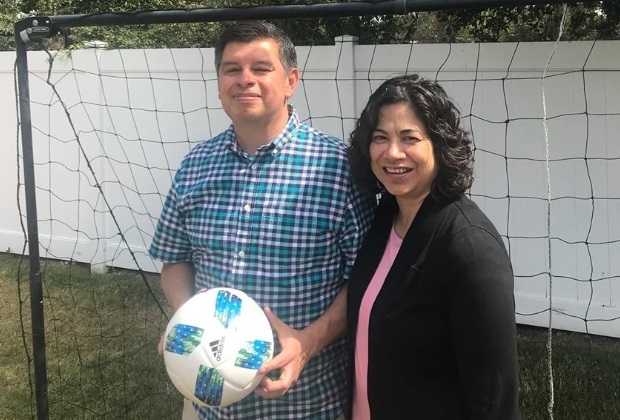 With the World Cup in full swing, many around the world are caught up in the competition, scores, and standings. But Sister Reyna I. Aburto, second counselor in the general presidency of the Relief Society, recently shared a message on Facebook that reminds us of the unity the World Cup can bring. She also shared a miracle her husband experienced during the 1990 World Cup that teaches us that even while we may feel each game has a lasting impact, our relationship with our Heavenly Father, Savior, and families are truly the only things that will have eternal significance.

"In our family, the World Cup is part of our family history. We can refer to many of our milestones in relation to a past World Cup. Our youngest son Carlos Enrique’s first word was 'gooooooooaaaaal!' because of the 1998 Cup. We even measure our dog Tule’s age in World Cups, not in dog years.

"A miracle that is dear to us occurred during the 1990 World Cup. Back then, my husband Carlos was 27 years old, single, and living in San Francisco California. At that point, he had been inactive from the LDS Church for many years, but one day he knew that he needed something strong to hold on to. He then remembered how he felt when he was nine years old and the missionaries came to his home in Mexico. That vivid memory made him reach for a copy of the Book of Mormon that had laid untouched for years in the apartment he shared with his brother. As he started reading, he could not stop, and even though he had two jobs and the World Cup was in full force, the Cup was not important for him, and he spent all the free time he had reading the book. He finished reading it in two weeks and was enthralled by it. While reading about Nephi and his firm desire to obey God; about Abinadi’s bold testimony of Jesus Christ; about Alma’s transforming process of repentance; and about the Savior’s loving ministering to faithful believers in the American Continent, Carlos had a mighty change of heart. He became a new man and he knew that he had discovered something that brings true joy.

"The World Cup unites millions of hearts during the 90 minutes that each game lasts. In the end, only one team wins the trophy and many teams are defeated. In a glorious way, we as members of The Church of Jesus Christ of Latter-day Saints are blessed by the gospel of Jesus Christ and by the covenants that we have made, which bind us together with our Father in Heaven, with our Savior Jesus Christ, and with each other, as we follow the promptings of the Holy Ghost. I know that if we endure the trials of life with faith, our spiritual rewards will be everlasting and eternal, and we will all win."