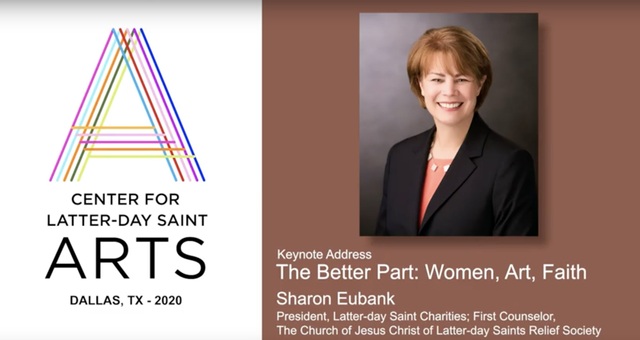 It was only fitting that Sister Sharon Eubank based her remarks at the Center for Latter-day Saint Arts Dallas event, “The Better Part: Women, Art, Faith,” on a quote by a little-known California watercolorist named Larry Brullo. He said, “First, one seeks to become an artist by training the hand. Then one finds it is the eye that needs improving. Later one learns it is the mind that wants developing, only to find that the ultimate quest of the artist is in the spirit.”

Sister Eubank took her talk to several unlikely places for an art event, beginning with Egypt. She spoke of Joseph of Egypt’s decision to forgive his brothers who sold him into slavery. Speaking of the mercy extended by Joseph, Sister Eubank said, “I don’t know what it took. I don’t know if it was hard or easy, but he did it. And he covered over the wounds—the physical wounds and the emotional wounds of being betrayed by his own brothers that he looked up to—and he covered those over with something strong, and he forgave them, and he saved his father’s house.”

Still, each time she strayed from discussing art, Sister Eubank flawlessly brought the conversation back. In this case, she then spoke of a Japanese art form called “kintsugi,” which consists of taking broken pottery, piecing it back together, and then filling the broken spaces with gold. When done well, she explained that the broken pieces actually become more valuable than they were beforehand.

“We are all broken and we get to have the chance, like Joseph, to overlay our scars with the gold of forgiveness, the gold of the gospel, the gold of trying to be like Jesus Christ and it makes us stronger and it makes us more valuable,” she said, later adding, “We worship perfection but this is something that’s different. This is a kind of beauty that says, ‘Perfection is one thing, but this is brokenness that has been mended and it’s more valuable than perfection.’”

Explaining that she recently had surgery to improve her vision by making the sharp images around her clearer, Sister Eubank said that being able to see those around us for their best qualities is an art form.

“The artists among us are able to filter that stuff out . . .and instead look at who people really are, that’s an art of seeing that I’d like to cultivate in myself and maybe some of you are very good at it,” she said. “I bet you know people who are very good at it. You might not think it’s an art, but think about how it makes you feel when you know somebody who does not pay any attention to all the blurry parts of you but they love the sharp, strong parts of you. That’s a wonderful gift.”

Once again coming back to art, Sister Eubank told the story of how Michelangelo’s David came to be. After sitting out in the sun baking for years, a town’s fathers determined that something needed to be done with a large piece of stone. They turned to a young artist named Michelangelo.

“I love that Michelangelo had the eye to be able to see through what most people would say is an unworkable, imperfect piece of stone— disaster, cooked, unusable—and instead he sees this. That ability to see through all of the imperfections is a divine artistry, and we don’t have to be good at sculpting to practice that art. All of us can practice something like that,” she said.

The Art of Persevering

As the director of Latter-day Saint Charities, Sister Eubank said that she has seen terrible things with her own eyes. Showing pictures of Syria when she visited nine years ago compared to the destruction found today in the country, Sister Eubank asked, “What do we do to give each other comfort when we live in a world that produces that? One of the things we can find is art. Art is a solace. Art is a comfort.”

Speaking of disaster in another time and place, Sister Eubank referenced a recent episode of The Crown, which showed the Aberfan Welsh Mining Disaster, a real-life avalanche in 1966 that took the lives of 116 children and 28 adults as an elementary school was covered in mining slag. After watching the episode and doing additional research, Sister Eubank learned that at the funeral the parents sang “Jesus, Lover of My Soul”—a song which Prince Phillip later said they sang from “the inside of their souls and it healed us.”

“Art helped them persevere,” Sister Eubank said. “It helps all of us persevere. And the art of persevering is one of the things that we can do with our lives that make it divine and make it holy.”

“Masterpiece” is a word frequently used in reference to art, but Sister Eubank told attendees that it also applies to our individual lives.

“The definition of a masterpiece is a person’s most important work and often it’s one of a kind. And when there is one-of-a-kind art . . . it gets insured, it’s transported with guards, it is enshrined in buildings that are themselves art. We charge money to see it and yet each one of us is that unique, one of a kind . . .the life that we’re living is the masterpiece. And the worst thing we can do with our masterpiece is compare it to somebody else, because O’Keeffe isn’t like Jasper Johns,” Sister Eubank taught. “And if we remember that we ourselves are a masterpiece exactly because we are not like anyone else, it takes away that desire to compare and feel guilty or bad that we’re not like other people. The most harmful thing we can do to our art is compare ourselves.”

She explained that Jesus has the eye of a master and is good at finding masterpieces. Using the event’s theme of Mary and Martha as an example, Sister Eubank explained how the Savior uncovered the masterpiece that was Martha. Explaining that we first meet Martha when Mary chose “the better part,” Sister Eubank said, “Jesus challenged her to get out of that place and step into the place that He had chosen for her.”

The next time we meet Martha in the scriptures is when her brother, Lazarus, has died.

“And she makes an enormous leap out of whatever societal corner she was supposed to be in and . . . she says, ‘Yea, Lord: I believe that thou art the Christ, the Son of God, which should come into the world’ (John 11:27). She’s not just a disciple, she a witness,” Sister Eubank said, explaining that only Peter bears such a strong witness of Christ in scripture, and together they serve as bookend witnesses to the divinity of the Savior.

Bringing her remarks full circle and putting a bow on them, Sister Eubank said, “I believe that our lives are the masterpieces and the art of the precious scars that we bear, especially when they’ve been mended with something as precious as gold, that’s a kind of art. When we stand in our brokenness that’s been mended because of Jesus Christ, that’s an artistic statement and it inspires others. The art of us seeing around or through imperfections is one of the greatest artistic divinities in this mortal earth because this mortal earth is full of imperfections. The joy of it is to see if we look beyond those to the 18-foot magnificent statue that’s in there but nobody else can see it. Can we be the ones?

“The art of persevering through tragedies and grief and inexpressible horror that is this life, knowing that it’s temporary, knowing that we will rise again. . . . Every one of us rises up out of our crucified hopes and dreams into something different. That’s what this whole life means. And the art of making our unique selves into a masterpiece. We’re masterpieces because we follow the Master.”

But before finishing, Sister Eubank explained why she remains a member of The Church of Jesus Christ of Latter-day Saints.

“Can we recognize when we’ve been broken and then mended how much more valuable we are to each other? This is my prayer, it’s my hope, it’s why I stay a member of the gospel of Jesus Christ, it’s why I’m a member of the Church,” she said. “Because I gain these glories that are more important to me and more lasting than all of that destruction that happened in a war or in a cycle of abuse or in mental illness or anything else. The gospel of Jesus Christ lifts me so that I can persevere.”

She closed with her testimony of Jesus Christ and a challenge.

“Jesus Christ is everything to me and I know He’s everything to you. He’s the core of everything we are, and He is the source of everything that we want,” she said. “He asks us to do two things. He asks us to keep the two great commandments—Can you love God? Can you feel the compassion God has for you? And can you extend that compassion and deep connection to other people? That’s all we have to do. Our masterpiece is how we do that back to the Lord and we all do it in different ways.”