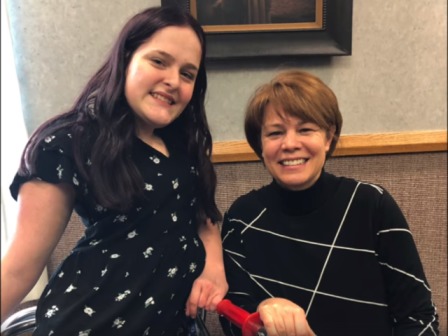 "I got a new ministering companion and was so excited when I learned that I had been paired with a celebrity in our ward," Sharon Eubank said in a video she shared on her Facebook page.

Sister Eubank's celebrity companion is 17-year-old Kendra Herrin. What makes her famous? Kendra and her twin sister Maliyah were born as conjoined twins who were then successfully separated in 2006 when they were 4 years old. The girls were featured twice on the Oprah Winfrey Show and in media outlets across the nation.

Oprah called the Herrin twins the "miracle twin daughters" because they survived a surgery that had never been attempted before: separating conjoined twins that shared one kidney.

►You may also like: If Oprah Taught Relief Society: 18 GIFs That Sum Up How Awesome It Would Be

"Ministering with a young woman has been a big surprise for me. . . I thought I would be teaching her, but it turns out she has taught me even more," Sister Eubank said.

In the video, Sister Eubank explains how Kendra's unique life experiences make her a compassionate ministering sister to those who struggle—and her cake baking and decorating skills help, too.