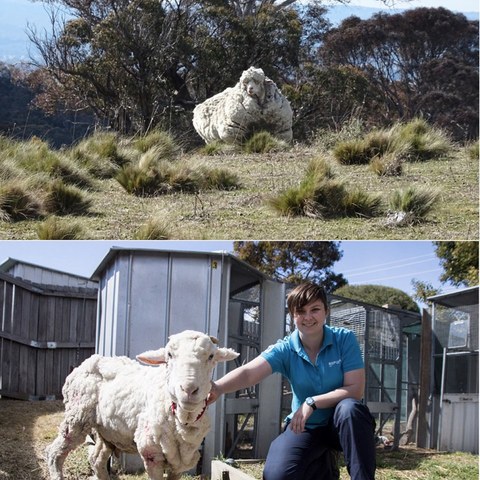 While traveling with Sister Becky Craven in the Pacific, Sister Sharon Eubank came across a story in the newspaper that perfectly illustrates what it means to minister to our fellow brothers and sisters: "Chris the Sheep." While traveling through New Zealand and Australia sheep country, Sister Eubank posted:

"I read this morning in the newspaper about Chris the sheep. In 2015 he was found unattended with more than 90 pounds (41 kg) of wool on him. He hadn’t been looked after or sheared for more than five years and was too heavy and weak to get food. He was just weeks away from dying. Caring people in Australia took him in and carefully removed all the weight of the heavy wool. His skin had infections from all the filth that had been trapped in the fleece. Cleaning and ointment were applied. Once Chris the sheep was freed from the heavy coat he had been carrying, he happily lived to an elderly age for a sheep. He died yesterday on a farm in New South Wales of old age. So many 'sheep' and 'lambs' are lost and haven’t been sought after. The weight of their burdens bears them down, and infections threaten to be their demise. This is the best photograph of ministering I have seen in a long time. Chris has a very expressive face for a sheep! I hear the voice of Jesus echoing as I read the article: 'Do you love me? Feed my sheep.' So this is my encouragement to all of us to go find someone who is heavy and lost and bring them home."

“Latter-day Saint Charities is one of the expressions from The Church of Jesus Christ of Latter-day Saints of how we’re trying to keep the two great commandments, to love God and to love our fellow men,” said Sister Sharon Eubank.