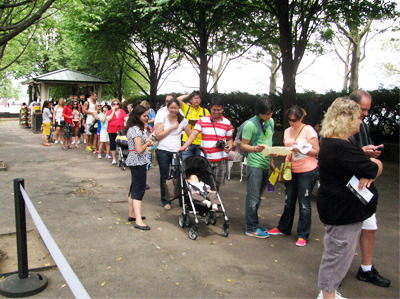 Ellis Island, which has been closed to the public since sustaining damage during Superstorm Sandy in October 2012, reopened partially October 28. However, the Statue of Liberty on Liberty Island in New York Harbor reopened for public visits on Independence Day, July 4, 2013.

The family history booth on Liberty Island, currently located under a temporary covering adjacent to the Statue of Liberty, allows visitors to research their families’ arrivals in America. Visitors stand in lines each day in order to receive the Statue of Liberty National Monument Official Certificate of Visitation, along with the opportunity to conduct research. For the first time this past summer, sister missionaries in the New Jersey Morristown Mission began serving at Liberty Island as volunteers at the booth to assist visitors in their efforts.