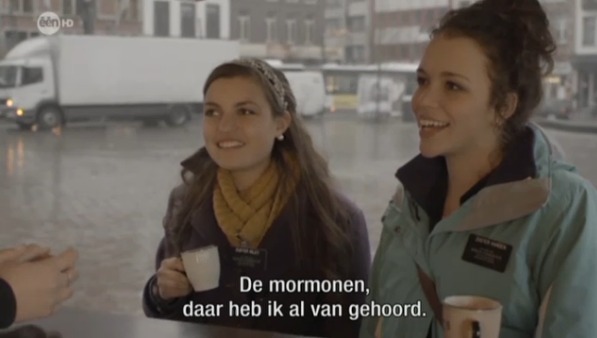 Missionaries are frequently featured in news media in different ways around the world. A few sisters serving in Turnhout, Belgium, however, found themselves sharing their testimonies on national television.

Sisters Hansen and Riley from Virginia and Florida respectively, were returning from a district meeting on a dreary day early in December of 2014 and decided to stop by a local food truck to get some hot chocolate, or "warme chocomelk" as they say it in Dutch. Turnhout was Sister Hansen's first area, and since she was about to be transferred, they decided it was a "farewell" hot chocolate. As they approached the truck, however, they noticed cameramen, microphones, and filming supplies.

"As they were about to turn away," Hansen's father Jim wrote in an email interview, "a young woman approached them and asked if they had an interesting story to tell." Turns out the woman was from a national evening news television program called "Everybody's Famous". The sisters ended up in a 45-minute interview with the film crew, though only a fraction of it actually ended up on the program. Sister Hansen, in a letter home described that "during the interview she [the interviewer] asked us the coolest questions and there were some moments when you could feel the Spirit and see the camera crew even getting into the conversation, like we all sorta forgot that this was an interview and not just a conversation about Jesus Christ, about the Gospel."

These sisters were clearly following the Spirit, as Hansen's companion, Sister Riley adds "It was so amazing because she listened and asked great questions and told us we were so interesting, that she sincerely wished us good luck and told us at the end that we sparkle." That "sparkle" as the news reporter described it, was shared with hundreds of viewers later on. "It was seriously so cool, just talking about what we do every day but being received so warmly and getting the chance to testify of Jesus Christ and of Heavenly Father's plan for me in front of potentially hundreds of Belgians."

The episode was titled "Missionary Work" and can be viewed here. "Zuster" Riley is on the left and "Zuster" Hansen on the right.  Though many words in the Dutch captions may be familiar, mostly English is spoken starting at approximately 1:15.

All screenshots from "Everybody's Famous" on www.een.be