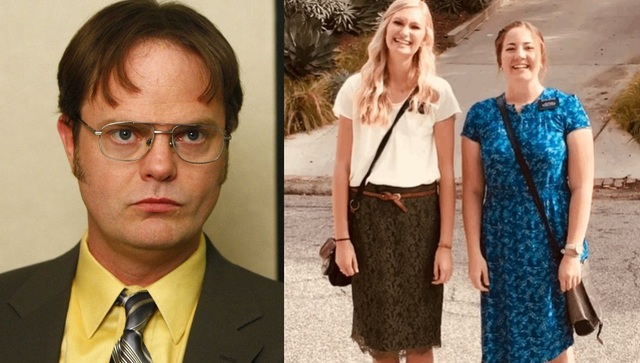 Last week the Mormon world was set abuzz when Rainn Wilson, best known for his role as Dwight K. Schrute from The Office, posted a picture of sister missionaries on his Instagram, saying, "I was visited by some very nice Mormon missionary Sisters this morning."

But how did this picture come about? And what did these sisters share with this iconic TV star?

The two sister missionaries, Sister McGuire and Sister Riggs, shared a little about this encounter in an email to LDS Living.

While tracting near Church members' houses, Sister McGuire and Sister Riggs knew that Rainn Wilson lived in the area, but they had no intentions of meeting with the TV star. "We just started walking down the street and I heard a voice from by his house, and I stopped and waited," Sister Riggs explained. Wilson was in his yard and came over to the fence, wanting to talk with the two sisters.

Despite their excitement, the sisters played it cool. "We actually pretended we didn't know who he was at first because we didn't want him to feel bombarded or like that is all we do (because it is for sure not!)" Sister Riggs shares.

But it turns out, Wilson already knew a little about the sacrifices LDS missionaries make and the beliefs they teach.

Sister Riggs adds, "It was an incredible experience to learn his take on religion and what religion he considers himself. He was very open and willing to talk with us. He has read some of The Book of Mormon and said he has one! He was super open to what we had to say and had very positive things to say about the Mormon religion."

When Wilson asked if he could take Sister McGuire and Sister Riggs' picture to share on Instagram, the two missionaries saw this as another avenue to share the gospel.

But that conversation was only the start of a full day of missionary work. "The rest of the day was FULL of miracles after that, so Dwight definitely set the mood for that day," Sister Riggs says.

In fact, Sister McGuire talked a little more about one of the miracles that followed, saying, "That same day, we knocked on a door of someone we thought [was a] member, but turns out this new move in was meeting with missionaries in Las Vegas and she is getting baptized!"

While these miracles or chance encounters made an impression on Sister McGuire and Sister Riggs, the two attest that the best part of their mission is how it has helped them grow closer to their Savior.

"My mission has shown me the reality of Christ and His infinite and intimate sacrifice. Before I couldn't say that I knew Christ. Now I can say with full confidence that He's my best friend, my Brother, my Redeemer that I have a real relationship with. I know and promise that He loves and knows everyone personally and perfectly. Never doubt that. When life gets hard (and it does for everyone) please never try to fight your battles alone! Christ and our Father in Heaven are there 100 percent," Sister McGuire says.

"My mission has helped my testimony grow so much I can't even explain it! My love for the Book of Mormon has only grown and I never get tired of studying it and I never stop learning even though we study it for hours a day. The Book of Mormon is incredible and can bring so much peace and joy into your lives if you will read it! . . . I've developed an even stronger relationship with my Father in Heaven and with His Son Jesus Christ. I know They are aware of me and my needs, and I know They love me and know me personally! I know Jesus Christ lives and that He died for us so that we may live again and that is just the greatest news! . . . I love this gospel with all my heart and I am in love with being a missionary! I hope everyone can get the chance to know Jesus Christ like I do because He does know you and love you," Sister Riggs says, adding, "And if Rainn sees this, I hope he knows how awesome he is!"