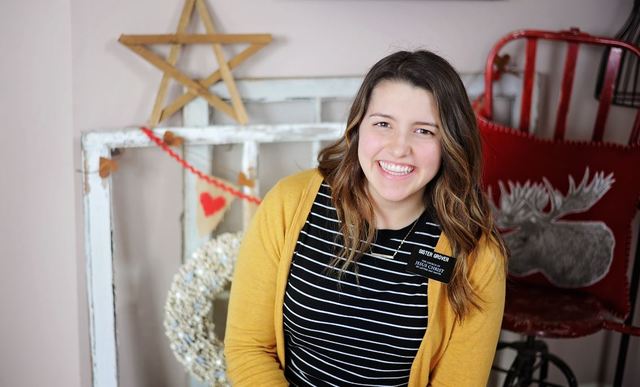 McKenna Grover desperately wants to thank a good Samaritan from her past—if only she knew where to find him.

Today, the 19-year-old Logan, Utah, native serves as a missionary for The Church of Jesus Christ of Latter-day Saints in the Maryland Baltimore Mission. But just two years ago, she was flat on her back in the middle of the street in front of Logan High School.

On a typically cold Cache Valley winter day, Grover strolled to her car in the student parking lot to retrieve her lunch. On the way back, she walked carefully in the crosswalk, judging an oncoming vehicle to be a block away.

Grover remembers the squeal of the brakes biting against the pavement.

She does not remember the impact.

Fifteen feet later, according to witnesses, Grover looked up at the sky and felt blood on her face. She could have been badly broken, paralyzed, or worse. Her mortal journey could have been over.

Suddenly a man appeared kneeling at her side.

“I’ll never forget him,” Grover told me recently. “I remember he kept saying that it was all going to be okay. He asked me a lot how I was feeling.” As an otherwise rough-and-tough construction worker at her school, she recalls that he took off his hoodie and put it over her. “He didn’t leave my side.”

That stranger who stuck it out through the hustle and bustle, who motioned police over when she worried about the driver getting a burdensome ticket, the one who reassured her even after the paramedics came — that was the missing good Samaritan.

Two years later, Grover still reminisces on the calming comfort the stranger brought her. “But I never got to thank him,” she said, her voice cracking under the weight of the memory.

Despite being in shock, Grover’s first thought was for the young high-schooler who’d been behind the wheel. “I knew he was speeding, but right away I felt so bad for him. I would rather be the person to be hit than the person to hit someone.”

Later, when Grover’s father arrived, she insisted he walk over to law enforcement and convince them not to ticket the young man. “I really didn’t want all this to be a burden on his family.”

Grover received stitches and although tests were initially inconclusive, she was eventually diagnosed with a concussion that changed her life. “My eyes couldn’t focus and my brain just hurt. I had a headache for basically a year.”

Soon she was in speech therapy, neurotherapy, and physical therapy. The sessions were the easy part. Sitting still? That was the real test.

“It was so hard!” Grover said with a laugh. “I just wanted to be doing things. School, work, going to dances, everything.”

Therapy was successful, and the day came for the gregarious girl from Logan to serve a full-time mission. It was never in doubt, Grover said, because she knew Heavenly Father had been steering her life and she was simply seeking to do His will, and not her own.

“I know He’s in charge and that every single person is a child of God,” Grover said. “And everyone deserves to feel the love and comfort I have felt.”

With a smile that starts in her eyes and bathes her entire face, Grover wishes to share this message with her reassuring good Samaritan. “Thank you! Whoever and wherever you are. Thank you for caring. Thank you for taking time to make sure I was taken care of. Your kindness in going out of your way has made a huge difference in my entire life.”

Not surprisingly, Sister McKenna Grover has a message for the rest of us, too. “We can all make a difference! We can each change a life, or even just a day, in such small ways.”

Spoken like one true good Samaritan in search of another.