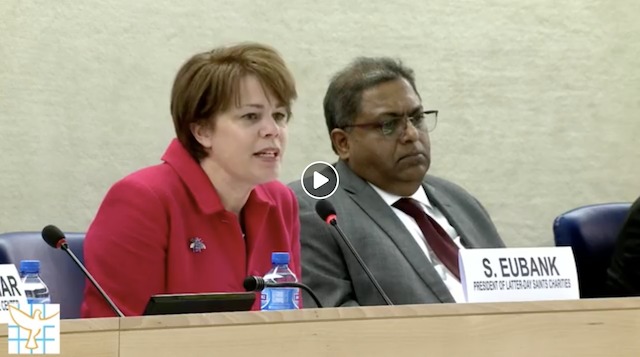 While speaking at The Second Global Summit on Religion, Peace and Security in Geneva, Sister Sharon Eubank quoted Joseph Smith as she discussed how to help protect against religious scapegoating and harmful generalizations.

The conference, organized by the International Association for the Defense of Religious Liberty and the United Nations Office on Genocide Prevention, featured high-level keynote speakers as they discussed the need to protect religious minorities amid hate and violence.

Among those speakers was Sister Eubank, the first counselor in the general Relief Society presidency and the director of LDS Charities. Speaking about the recent, unfathomable massacres taken place in places of worship, Sister Eubank discussed the importance of standing with and defending those of other religions with a quote from Joseph Smith:

Sister Eubank also shared that blaming individuals, not groups, will help eliminate the "broad-brush speech," or harmful generalizations and scapegoating that causes a cycle of hate and incitement.

"As the incitement continues, it erodes rights and protections until there is criminal violence, as we have all talked about today," Sister Eubank shares, adding, "I challenge every citizen to be able to do something about this. We can always stand up to this broad-brush speech."