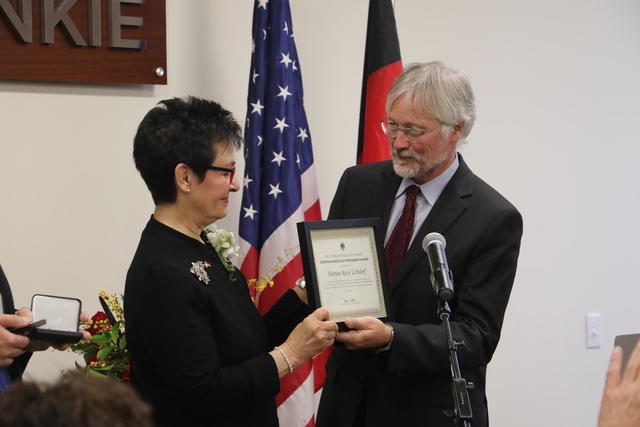 "Harriet draws people to her,” said Elder Andersen after Sister Uchtdorf received the German-American Friendship Award. “She has promoted German and American friendships, but in a much broader sense she has been an example of the Savior’s teachings for all of God’s children: Love one another as I have loved you.”

Sister Harriet R. Uchtdorf was honored Monday as a bridge builder, a peacemaker and a kind and gracious citizen of two allied nations that were once enemies.

At a midday event, Hans Jörg Neumann, Consul General of the Federal Republic of Germany, presented Sister Uchtdorf with the German-American Friendship Award.

Her husband, President Dieter F. Uchtdorf of the First Presidency, stood by his wife of 54 years as she accepted the award. They were joined by friends and relatives — including President Henry B. Eyring of the First Presidency and Elder Neil L. Andersen of the Quorum of the Twelve Apostles and other Church leaders — who gathered for the award ceremony at the downtown Kirton McConkie law office in Salt Lake City.