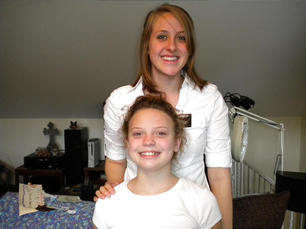 Sister missionary had "an infectious laugh"

Vanessa Bentley, a 22-year-old missionary for The Church of Jesus Christ of Latter-day Saints from Tucson, Ariz., was killed Tuesday in a two-car collision on state Route 37 in the town of Lisbon in upstate New York.

Sister Bentley's companion, Natalie Love of Hemet, Calif., and the driver of the other vehicle involved in the accident, Nora McDonald of Madrid, N.Y., were also injured in the collision. Their injuries do not appear to be life threatening.

According to the police report, the accident occurred when the car carrying the two missionaries from the Utica New York Mission attempted to make a left-hand turn. The other vehicle hit the passenger's side of the missionary vehicle directly. Sister Bentley was sitting in the passenger's seat.

LDS Church spokesman Scott Trotter said that Sister Bentley had been serving as a missionary for 13 months at the time of the accident.