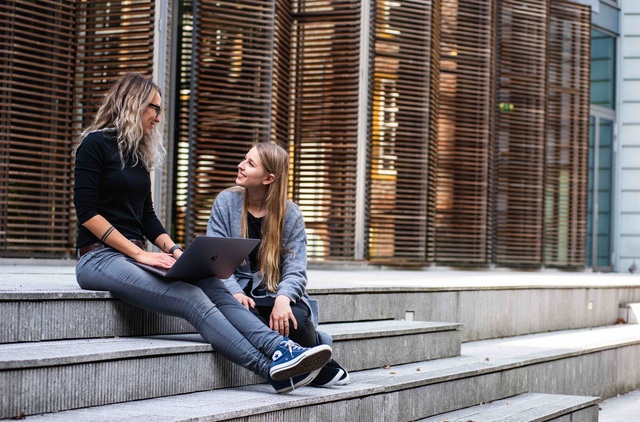 Like many women around me, I decided to participate in the invitation President Nelson extended to the women of the Church to fast from social media for 10 days. He said, “I invite you to participate in a 10-day fast from social media and from any other media that bring negative and impure thoughts to your mind.” This was one of four invitations all under the overarching objective to “shape the future by helping to gather scattered Israel.” Here are three experiences I had during my 10-day fast that I hope you’ll find beneficial as you navigate your use of social media in the future.

In an attempt to be more well-read, I recently started to read Homer’s The Odyssey. There is a point in the story in which Odysseus’s son, Telemachus, visits an old friend of his father’s whom he has never met named Nestor. Without knowing who he is, where he is from, or why he has come, but assuming by his clothing that he is of royal birth, Nestor invites Telemachus in and bids him and his companion eat at the feast taking place. After reading this, I thought about how much things have changed since then. No one just randomly shows up at a stranger’s house and gets invited in for a meal without question. That’s not a thing. Or is it?

A few days into my fast from social media I came home from work to find my roommate’s cousin lounging on the couch in the living room just adjacent to the kitchen. I’d never met her and I had no prior warning of her presence in the house. I began cooking my dinner while she laughed to herself at the text conversations she was having. As I neared the end of my meal prep, I had the thought, Do I eat this at the table or do I go into my room and watch Netflix? I have been on the fence about Netflix being part of my fast because it isn’t technically social media, but it is a huge time waster for me. Then, the scene from The Odyssey replayed in my mind and I thought, I should invite her to eat dinner with me. My immediate reaction to this thought was, Ugh, I don’t want to but I decided that it was either eat dinner by myself in my room or ask her to join me, so I asked.

Did we become best friends? Do I remember her name? The answer is no on both accounts. However, the experience I had with her was memorable. Sharing a meal and making a connection with a stranger was more rewarding and fulfilling than zoning out to Netflix or sitting alone quietly eating my food. She was able to talk to me about something that was bothering her and when my roommate came home she was grateful that I had been kind to her cousin.

The lesson learned here is best summarized by Elder Neal A. Maxwell when he said, “None of us ever fully utilizes the people-opportunities allocated to us.” I would add, especially when we’re standing behind a wall built by poor social media habits. We could all take a leaf out of the pages of The Odyssey and pay more heed to and show more kindness toward the strangers around us.

As Latter-day Saints, we believe that our time on earth is probationary and a testing ground “to see if [we] will do all things whatsoever the Lord [our] God shall command [us].” None of us, save Jesus Christ, has passed this test without mistakes and so we are taught to call upon God’s mercy and repent and through the power of Christ’s Atonement we are forgiven and we move forward. That’s the idea, anyway. The execution of this plan is much easier said than done. Repenting requires us to confront our trials and make changes. For anyone who’s ever given this a sincere effort, you know how difficult it can be. The end result is healing, powerful, and wonderful, but it can require much of a person, their time, and patience, so it’s no surprise that we can be inclined to avoid or delay repentance.

Enter social media. During my social media fast, I have noticed that one of my coping mechanisms for pain is to use social media as a diversion from it. This is known in the counseling/therapist world as self-medicating and is also a reason for pornography use. Instead of confronting the pain and working on solutions, I often turn to social media to distract me and numb the pain I am feeling. Strategically, this is a shortsighted approach and stagnates personal progress. Emotionally, it inhibits peace.

During a church meeting I attended last week, someone advised that the best way to repent is to walk straight into the eye of the storm. That same day, I texted my brother who lives in Florida to ask how he and his family were faring with Hurricane Michael. Part of his reply was that the destruction is the worst in the eye of the storm and lessens with distance. Since they weren’t close to the storm, they didn’t suffer any damage or ill consequences. I related that to my experience with social media. When I use it to distance myself from my pain, I don’t feel much. But without it, the more I lean into the pain, the more I feel and the more unbearable it becomes. And in that moment, when I can’t bear the pain anymore, that’s when the desire to change and repent occurs. That’s when progress begins.

So, taking a step back from social media in combination with intentionally reading the Book of Mormon (another invitation from President Nelson), I have already seen real progress in a specific trial I am dealing with. It has not been completely resolved, but I have felt real healing within myself as a result of stepping away from social media and walking into the eye of the storm.

As I mentioned earlier, Netflix was a source of conflict for me during the fast. I decided that if I had time at the end of the day, I could dedicate some time to a show. Last night I opened my laptop and found a show to watch with a TV-PG rating. I got through one episode and started a second. About halfway through the second episode I shut my laptop and felt a sense of relief. The constant noise was starting to grate on me. And although it holds a low rating, I still noticed that some of the content was offensive to my spirit. It surprised me.

When extending the invitation to fast from social media, President Nelson asked us to pay attention as we “take a break from perspectives of the world that have been wounding [our] spirits.” Having been a member of The Church of Jesus Christ of Latter-day Saints my whole life, I’ve heard about keeping our spirits clean, pure, wholesome, etc. many times. However, for some reason, this imagery of wounding our spirits gave me a new lens through which I see my own spirit and what it means to be spiritually healthy. When I don’t eat well, I feel sick. When I don’t exercise regularly, I feel slow and weak. When I don’t get enough sleep, I become emotionally compromised. Poor use of social media or any media and immersing ourselves in the perspectives of the world does similar things to our spirits. It can make your spirit feel sick, weak, and slow—wounded. I’ve noticed as I’ve spent less time on social media my spiritual sensitivity is heightened and the noisy things become more blaringly distracting and undesirable.

After these experiences, my impression of the invitation President Nelson gave us to fast from social media for 10 days was not to show us that social media is inherently bad, but to take note of how we use it and how it influences us.  There is a lot of good that comes from social media, but if we use it unwisely or carelessly it can injure our spirits, something that President Nelson warned us about last general conference when he said, “in coming days, it will not be possible to survive spiritually without the guiding, directing, comforting, and constant influence of the Holy Ghost.” When our spirits are healthy they are ready for and worthy of the companionship of the Holy Ghost.

What does this mean going forward? For me, it means making a plan and being intentional about the way I use media and technology in my life. If I am going to do my part in shaping the future and gathering scattered Israel, I could use the ability to connect with strangers, lean into and heal from painful experiences, and a healthy and able spirit.