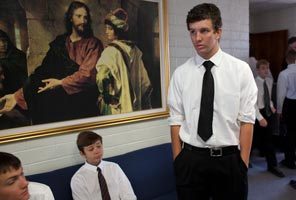 Three dozen of Mitt Romney's relatives live here in a narrow river valley at the foot of the western Sierra Madre, surrounded by peach groves, apple orchards and some of the baddest, most fearsome drug gangsters and kidnappers in all of northern Mexico.

Like Mitt, the Mexican Romneys are descendants of Miles Park Romney, who came to the Chihuahua desert in 1885 seeking refuge from U.S. anti-polygamy laws. He had four wives and 30 children, and on the rocky banks of the Piedras Verdes River, he and his fellow Mormon pioneers carved out a prosperous settlement beyond the reach of U.S. federal marshals. He was Mitt's great-grandfather.

Gaskell Romney, Mitt's grandfather, settled in Mexico as well, and Mitt's father, George Romney, was born in nearby Colonia Dublan — raising the possibility of a 2012 presidential race between two contenders whose fathers were born outside the United States.

Read the rest of this story at