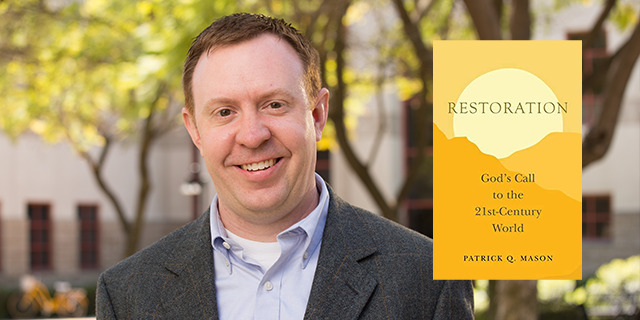 Sponsored: The restored Church or the restoring Church?

A subtle but significant rhetorical shift occurred during General Conference in April 2014. Almost in passing, Dieter F. Uchtdorf, then Second Counselor in the First Presidency, introduced the notion of an “ongoing” Restoration:

Sometimes we think of the Restoration of the gospel as something that is complete, already behind us—Joseph Smith translated the Book of Mormon, he received priesthood keys, the Church was organized. In reality, the Restoration is an ongoing process; we are living in it right now. It includes “all that God has revealed, all that He does now reveal,” and the “many great and important things” that “He will yet reveal.”1

In the years that followed, “ongoing Restoration” has become something of a buzzword among Latter-day Saints.2 I don’t believe Elder Uchtdorf intentionally meant to create a new catchphrase or hashtag; indeed, as you can see, he didn’t even use that precise wording. Rather, “ongoing Restoration” has become organically popular because it succinctly captures something important about who we are and what we believe as members of the Church of Jesus Christ of Latter-day Saints.

What began with Joseph Smith was exactly that—a beginning. Then and now, the work of restoration was more direction than destination.3 Or, as President Russell M. Nelson observed, the Restoration is a “process” that we are privileged to witness and participate in. “If you think the Church has been fully restored,” he said, “you’re just seeing the beginning. There is much more to come.”4 In other words, when we think of the Restoration maybe we should consider ours to be less a fully restored church and more of a restoring church.5

What does it mean to be in the ongoing business of restoring? On one level, it’s just what President Uchtdorf suggested, namely that as a church with an article of faith that embraces the notion of continuing revelation, we see the Restoration as something that is constantly unfolding rather than as something already accomplished. Certainly, we build on the insights and achievements of previous generations, but we believe God has more to say and to teach us.

The Restoration is ongoing because God has unfinished business with the world. We don’t believe in a Deist Creator who did his part and then left us to our own devices, with the universe running like an intricate clock while he lounges on a beach in some distant corner of the cosmos. Rather, we believe in Heavenly Parents who remain deeply invested and intimately involved in the lives of their children. Our Father never sleeps, never rests, never takes a day off in pursuing his “work and glory” of enticing his children to share his life with him.6 The Restoration is the ongoing reconciliation between God and humanity, and by extension between the many branches of the human family, in modern times.

Fundamental to the concept of an ongoing Restoration is continuing revelation, both to individuals and the church as a whole. This gift cannot be minimized, but it’s also not meant to be hoarded. As part of our standard apostasy narrative, Latter-day Saints have overgeneralized the response that Joseph Smith received from a Methodist minister upon reporting the details of the First Vision to him. We have supposed that this one preacher’s opinion, that “there were no such things as visions or revelations in these days; that all such things had ceased with the apostles, and that there would never be any more of them,” represented the view of all Christians in the early nineteenth century and ever since.7 To the contrary, countless other good women and men have experienced profound visions of God, Jesus, and angels—prior to, at the time of, and since Joseph Smith’s transformative visions.8 Over the centuries and still today, many other Christians have embraced the notion that “God is still speaking.”9 For instance, the outpouring of spiritual gifts so prominent in the early decades of the modern Church of Jesus Christ—healings, visions, tongues, prophesying—are now more commonly displayed among our Pentecostal sisters and brothers than in our own congregations.

This is not to say God’s power as demonstrated through spiritual gifts is not present among the Latter-day Saints; far from it. It’s only to emphasize that our people no more have a monopoly on God’s voice than we do on truth or goodness. After all, we believe that at some future point in the ongoing Restoration we’ll receive (or come to recognize) additional sacred records documenting how God has spoken to “all nations of the earth.”10 Part of our role as agents of the Restoration is to rejoice in God’s continuing revelation, wherever and to whomever it happens. That means declaring to every people in every nation that they have every right to hear God speaking to them “according to their language, unto their understanding.”11 This is good news to proclaim, indeed.

By itself, continuing revelation is insufficient to fuel an ongoing Restoration—or at least, not if we understand revelation simply to be the act of God speaking to his children. As any parent knows, talking to your kids is one thing, but it’s another thing entirely for them to listen and understand. The gift of revelation must always be paired with the gift of discernment. We have to listen to God’s voice, and discern what that voice is telling us today.12 It is not enough only to know what God intended for his children in previous generations. We have to know what God wants for us right now.

The ongoing Restoration means that every generation, and every person, must rediscover the gospel of Jesus Christ for themselves. The pioneers’ Restoration was for the pioneers. Your grandparents’ Restoration was for your grandparents. What does the Restoration mean for you, today, at this moment? What does God need you to do that no other person and no other generation has ever done? Sure, there are plenty of constants across time and space—that’s what the first principles and ordinances are, and this is why we always build upon the solid foundation of prophets and apostles with Christ as the chief cornerstone.13 But what’s the “new song” that God wants to write and sing with you?14 The melody you sing will harmonize with those who have gone before, but it will be yours, not theirs. The church has to be alive, has to breathe, has to keep the faith with the tradition while remaining alive to the present workings of the Spirit. The ongoing Restoration never loses sight of the righteous traditions of our mothers and fathers. At the same time, in the ongoing Restoration we use tradition as a springboard to propel us forward, not an anchor to keep us stationary.

This is the exciting part. We weren’t put on earth to watch reruns, no matter how good those old episodes were. We’re not here just to reenact great moments from sacred history. We’re here to make something new, and to do it in partnership with God. The ongoing Restoration is the “new” in the “new and everlasting covenant.” Our Heavenly Parents call us to co-create with them, to co-restore with them, until working together we behold a new heaven and a new earth. As those who believe that God will “yet reveal many great and important things,” we can look to and build the future with faith, hope, and love, confident that ours is a restoring church, not simply a restored one.

“Restoration: God's Call to the 21st-Century World” is available now at Deseret Book.

3 See LeGrand R. Curtis Jr., “The Ongoing Restoration,” Ensign (April 2020). Thanks also to Rob Daines for some of this language.

5 Thanks to Carol Lynn Pearson for this idea.

8 On Joseph Smith’s contemporaries, see Richard L. Bushman, “The Visionary World of Joseph Smith,” BYU Studies 37:1 (1997–98): 183–204. For a fresh reappraisal of how the Restoration relates to traditional Christianity, see Fiona and Terryl Givens, All Things New: Rethinking Sin, Salvation, and Everything in Between (Meridian, ID: Faith Matters, 2020).

9 This particular phrase has been a successful campaign by the United Church of Christ since 2004 (see https://www.ucc.org/god-is-still-speaking). For a historical treatment see David F. Holland, Sacred Borders: Continuing Revelation and Canonical Restraint in Early America (New York: Oxford University Press, 2011).