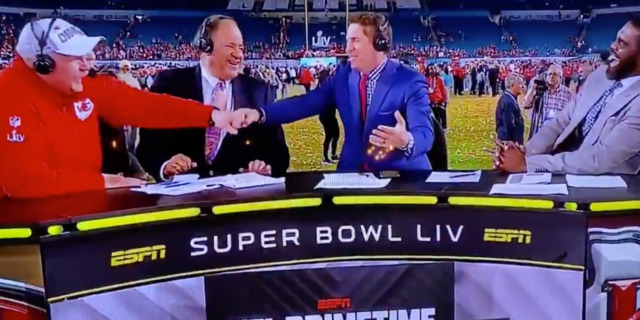 Start with a Smile: Andy Reid and Steve Young Give a Shoutout to Their Alma Mater and Other BYU Super Bowl Highlights

Editor's note: "Start with a Smile" is a weekly Monday feature that starts the week off with family-friendly content.

After the Kansas City Chiefs won, Reid sat down with ESPN analysts, including Steve Young. Reid motions to Young in his responses and says, "How 'bout the Cougs? What a shoutout to them with 'Dirty Dan' playing for us. It's beautiful."

Young later replies, "[Reid] taught me everything I know about quarterback."

Andy Reid to Steve Young: “How ‘bout the Cougs? What a shoutout to them with ‘Dirty Dan’ playing for us. It’s beautiful.”#BYU #BYUFootball #SuperBowl #ChiefsKingdom @kslsports pic.twitter.com/enmR9gLScC— Mitch Harper (@Mitch_Harper) February 3, 2020

Great moment on ESPN between Andy Reid and Steve Young.

Young: “My JV coach [at BYU]. He taught me everything I know about quarterback.”#BYU #SuperBowl #ChiefsKingdom @kslsports pic.twitter.com/daxCWc1xYJ

BYU Football congratulated the winners with a photo of Reid and Sorensen.

Also causing a buzz on social media this weekend was BYU basketball player TJ Haws. After making a game-winning shot against St. Mary's, Haws rushed to the hospital for the birth of his first child, his son Tyson.

Cougar Nation!
Thank you for all your support!
Last night was truly amazing!... but for Lauren and me, today was even better.
Everyone welcome Tyson Ralph Haws to the world.
02022020— TJ Haws (@tjhaws30) February 3, 2020