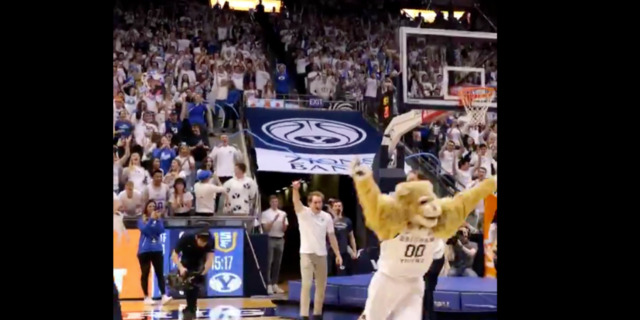 Start with a Smile: Watch Cosmo the Cougar's Viral Weekend Shot and Other Popular Videos of the BYU Mascot

Editor's note: Start with a Smile is a weekly Monday feature that starts the week off with family-friendly content.

Cosmo the Cougar’s airborne shot from the three-point line is the buzz of the sports world this weekend. The video already has over 2 million views on Twitter and even made it on ESPN SportsCenter.

COSMO THE COUGAR FROM THE 3-POINT LINE 🔥

This isn’t the first time the mascot from Brigham Young University has gotten social media attention.

Hey @byu_cosmo. My grandson turned three today and guess what he wanted for his birthday? Yup, a Cosmo drum to go with his Cosmo outfit! 🤙 #cosmointraining #turbulence #boomboomclap pic.twitter.com/IasJbFFyVW

In addition to his trick shots, Cosmo also has skills with a lightsaber.

The Cougarettes, a BYU dance team, frequently invite Cosmo to dance with them during games.

Cosmo still got it 🕺

Cosmo has also starred in some of his own dance videos.