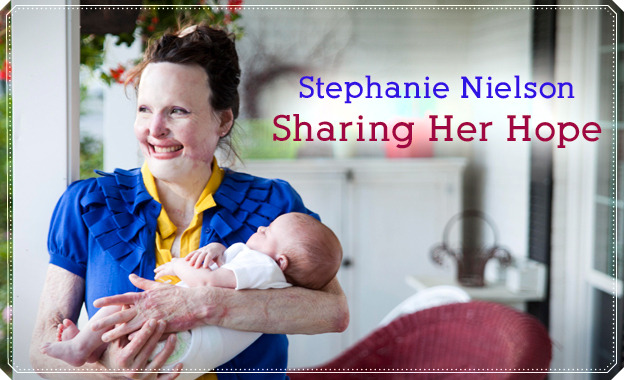 On August 16, 2008, Stephanie Nielson boarded a Cessna 177 Cardinal for a daytrip with her husband, Christian, who had recently earned his pilot’s license, and Doug Kinneard, Christian’s flight instructor and dear friend.

After stopping in St. Johns, Arizona, to refuel for their return to Mesa, the small plane sped down the runway and climbed into the sky. But without warning, the plane plummeted to the quiet neighborhood below.

The 27-year-old mother of four was knocked unconscious upon impact, only to awaken to the sickening smell of burning fuel and burning flesh—her flesh. “I was drowning in flames,” she recalls. “I reached for the seatbelt, but I couldn’t find it. I couldn’t get out.”

Nielson screamed for help, but her cries went unanswered. Christian had escaped the plane, believing his wife was right behind him, and Kinneard was unconscious in his seat. Finally she stopped struggling and accepted that she would burn to death. But she suddenly felt someone at her side guiding her hand to unbuckle the seatbelt and guiding her to the airplane door—and that someone was her deceased nana, Aurora. When Nielson escaped from the plane, her body engulfed in flames, her grandmother told her: “Roll.”

“There were people from the other side of the veil helping me,” Nielson says. “I felt my grandmother and others there.”

In addition to help from loved ones beyond the veil, Nielson says there were other miracles that day.

“The first miracle is that when we crashed, we didn’t hurt anyone on the ground,” she says. And Nielson believes where the plane crashed was no coincidence—across from an LDS bishop’s home.

“I remember men running over to me,” she recalls. “The first thing they asked is if there were other people in the plane. Then they asked if I was LDS and if I wanted a priesthood blessing. They gave me a blessing that I would be comforted and that things would turn out the way they were supposed to, and that I would have limited pain. It was awful, but it was a very spiritual moment.”

Christian Nielson, age 29, and Doug Kinneard, age 48, were also badly burned. With a broken back and burns on 40 percent of his body, Christian was the most fortunate of the three plane-crash victims. Soon after they were airlifted to the Arizona Burn Center in Phoenix, Kinneard, who suffered burns on 90 percent of his body, died from his injuries.

Doctors put the Nielsons in medically induced comas. Christian awoke about five weeks later, but it would be three and a half months before Stephanie would regain consciousness.

Her arms, legs, hands, and face were covered with third- and fourth-degree burns—the worst occurring on her face. She was unrecognizable, but surgeons were at least able to retrieve enough tissue from other parts of her body to give her a new nose and ears. There was talk of amputating limbs. A deadly liver infection nearly killed her, and her heart stopped beating on multiple occasions. All the while, doctors performed surgeries every few days to harvest and graft new skin.

On November 5, 2008, Nielson awoke to find her body encased in bandages. She was unable to move, unable to speak. But her mother and sister Page were at her side. They gently told her about the accident and that her children had been living with her sisters in Utah while she and Christian recovered. Lucy had baby Nicholas. Courtney had the three older children: Claire, age 6; Jane, age 5; and Oliver, age 3. She also took over Stephanie’s popular blog, NieNie Dialogues, to keep readers updated on her sister’s condition.

Nielson was devastated to be so helpless, unable to care for her children.

“When I woke up from my coma and learned where my children were, I felt guilty, but I also felt at ease because I knew they were being taken care of,” she says. “This is what families are about.”

In mid-November, the couple moved to Utah, with Stephanie at the University of Utah Burn Center, to be closer to their children while they continued their long physical and emotional recovery.