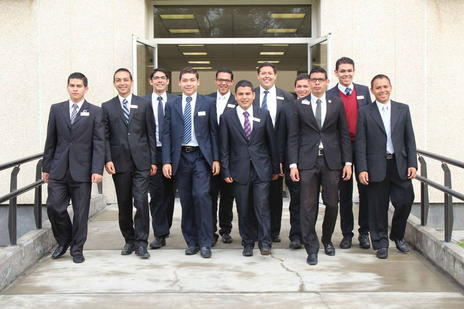 The final class of approximately 650 students graduated from Benemerito de las Americas, an LDS Church-owned high school in Mexico City, on June 14. At the graduation ceremony, Elder Alfredo Miron, the school's final director and an Area Seventy, symbolically handed a large wooden "key to the campus" over to the new MTC President Carl Pratt. On the key was written the name of the school with the dates 1963-2013, indicating its "fifty years of teaching the youth of the Latter-day Saints." Under these dates was written 2013- Missionary Training Center, and the scripture, "Behold, I will hasten my work in its time" (Doctrine and Covenants 88:73).

On June 26, President Pratt and his wife, Sister Karen Pratt, welcomed their first group of about 100 newly set-apart missionaries, some of whom had graduated as high school students only a week-and-a-half earlier from the same campus. "I cannot believe it's only been 10 days since I graduated from this school," said one elder as he was entering the new MTC. "It's quite a special experience to be able to see the way in which the Lord transforms things in order to fulfill his work.