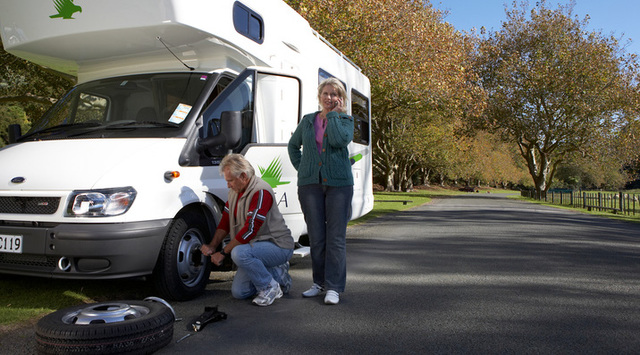 Every day we have chances to be a part of Heavenly Father’s tender mercies to His children and to become more like Him and our Savior. Earlier this month, Latter-day Saint, Mary Hanlin from Duncan, Arizona, experienced what it is like being a part of a tender mercy for a family in need.

While on a simple trip to Walmart in Safford, Arizona, with her daughter and son-in-law, Hanlin saw a family on the corner holding a sign.

As they pulled into the Walmart parking lot, she saw that the handwritten sign said simply, “Need a tire.” She immediately told her daughter and son-in-law she would drop them off in Walmart. Her daughter, knowing her mother’s tender heart, stated, “You’re going to help them aren’t you?” Hanlin smiled and said, “I’m going to try.”

When Hanlin stopped to talk to the stranded family, she found out they were headed to a hospital in Oregon in their RV to visit their dying mother and grandmother. But to be able to make it all the way up there, they needed new tires they could not afford.

As Hanlin talked to one of the family members (whose name she never learned) and heard her story, she made an interesting connection—the stranded woman’s mother lived in the same city where Hanlin’s sister lived.

But another part of their story tugged at Hanlin’s heart. “I was not with my own mother when she passed and I miss the closure of that,” Hanlin said. This was an opportunity for her to give someone else the chance to see their loved one, one last time.

As Hanlin didn’t have cash to help them financially, she felt she could at least see if she could round up someone else to help with the family’s need.

First, she called her bishop, who instructed her to price tires at the Walmart tire center. They needed at least two tires, which cost $125 per tire—excluding taxes and services.

After pricing the tires, Hanlin and the family walked back to the RV where the bishop and another ward member showed up to help. Hanlin called her son, who was a mechanic, to get the number of other businesses that might be able to help, and soon found out from him that the salvage yard might have a tire they could use. A quick call to the salvage yard by the bishop confirmed it, and while on the phone, the bishop also paid for the tire. Hanlin’s daughter and son-in-law quickly escorted the family to the salvage yard. In the meantime, other shoppers at Walmart overheard the situation of the family and bought them two new tires from Walmart.

By the time all was said and done, the traveling family had received four new tires in addition to more food and money for their trip.

“I haven't heard from the people since, but I do believe that Heavenly Father will provide all that they are in need of to get safely to see her mother,” Hanlin says. “I was lifted on high. I was able to let go of my own problems. It made me feel so good to help and to know that goodness of God's love can still bring people together to work for a common goal.”

As Elder David A. Bednar put it in the October 2016 General Conference, “We more fully come to know the Lord as we serve Him and labor in His kingdom. As we do so, He generously blesses us with heavenly help, spiritual gifts, and increased capacity. We are never left alone as we work in His vineyard.”