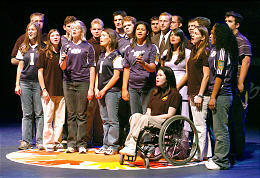 Strict guidelines at Y. are simple, not for everyone

The honor code at BYU found itself under a lot of scrutiny the past few weeks.

Some outsiders scratch their heads over its meaning and application. Late-night comedians have found it an easy target. Some have praised its existence while others believe it needs an overhaul.

The most recent rung on the honor code examination ladder came this week in an article posted on the Internet site "Deadspin."

The Cliff Notes version is this: Sources you would describe as disgruntled or failed athletes believe the honor code is applied with a brush dipped in racism and religious double-standards.

I won't dissect it, defend it or criticize the "Deadspin" piece on The Code.

Intelligent folks can read the Deadspin story, weigh its theme and decide for themselves how accurate or what meat it brings to or distracts from the discussion.