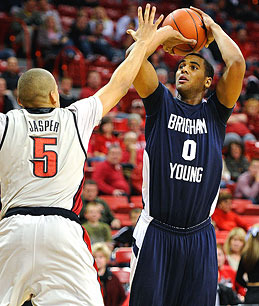 These days, bad behavior among college athletes is a fact of campus life. Beat up a freshman in a barroom one night and you can be back on the court three days later. Just this week, a Sports Illustrated and CBS News investigation found that more than 200 players on the rosters of 25 major college football teams have run afoul of the law. Nearly a quarter of scholarship athletes on the University of Pittsburgh squad have criminal records.

College athletics is a multibillion-dollar enterprise, and the pressure to win at any cost — including turning a blind eye to player misbehavior — can be overwhelming. That's why the news this week that Brigham Young University (BYU) would force starting center Brandon Davies to miss the rest of the season for violating the school's honor code was so surprising.

The team looked like a title contender. BYU is ranked third in the country, and Davies, who averages 11.1 points and 6.2 rebounds, is a key player; in their first game without him, the Cougars were trounced by the University of New Mexico, 82-64.

But the most surprising fact of the story is that Davies got booted for behavior that wasn't criminal. What he did takes place, to put it mildly, every day in colleges across the country: Davies had sex with his girlfriend.

BYU is owned and operated by the Church of Jesus Christ of Latter-day Saints, which frowns on premarital relations. Davis, like 98% of BYU students, is a Mormon. Upon entering the school, students vow to abide by its honor code, which prohibits premarital sex as well as indulging in alcohol or coffee. "The honor code is an essential part of your recruitment to BYU," says Hall of Fame quarterback and ESPN analyst Steve Young, who played at BYU from 1981 to '83. "It's not like you find out later — 'Oh, you didn't tell me! I didn't know that!' But there's a spirit on campus that is just, 'O.K., fine, now let's now go have a good time.'"
Read the rest of this story at time.com